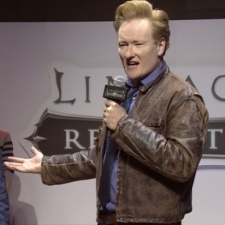 The comedian revealed the release date for the MMORPG in Europe and the US as November 15th 2017. The game has been hugely popular in Asia, making $176 million in its first month in South Korea alone.

O’Brien hosts the TV show Conan in the US, where he also airs the ‘Clueless Gamer’ segmented, typically playing games with celebrities or game developers. Recently played games include Shadow of War, Cuphead and ARMS.

You can watch a recorded video of the livestream below.