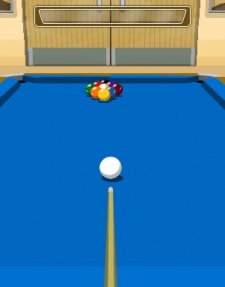 April 30th, 2008 - 11:30am
By Rob Hearn, Managing Editor
Last week, we told you that Distinctive Developments has published an application called Anytime Pool for Facebook, thereby joining Digital Chocolate, Com2Us, I-play, and RealArcade on the roll of developers using the modern phenomenon of social networking to bring its games to a wider audience.

"We're not sure," wrote Stuart, unsurely "if it represents a full-scale move into social games, or is an early look at a game that's coming to mobile, or if it's just an experiment."

Well Distinctive Developments MD Nigel Little has been in touch to let us know. "The first thing I want to get across is that Distinctive is not moving away from mobile games development," he told us.

"What you are seeing is a consequence of the convergence between the casual gaming platforms. We see mobile as a being a major platform for casual games but it's currently being suffocated by the fact that most people aren't aware of the great games that are available."

Consumer awareness certainly seems to be the main advantage of developing for Facebook, which can't in itself be monetised.

"The reason we chose to develop Anytime Pool for Facebook was that we felt that it could help people discover our mobile games and also allow us to deliver a true multiplayer version of pool on mobile."

The next bit is exciting. It seems that Distinctive is planning some degree of interoperability between games on Facebook and mobile. "The plan is to release a multiplayer version of pool on mobile later this year that allows you to play against your Facebook friends, allowing you to play pool anytime and anywhere."

So, Nigel sees Facebook as an integral part of mobile gaming's future, rather than a treacherous rival. "In the near future," he said, "you might see us develop for other platforms but this should not be seen as us abandoning mobile. Far from it, we are just doing what we feel is right to secure its future as a gaming platform."

Thanks to Nigel for his remarks.