Quincy Williams nabs £300 worth of cryptocurrency 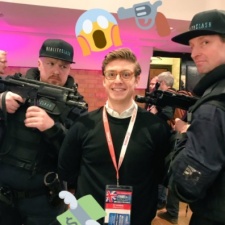 The competition tasked conference goers with taking a selfies with soldiers and posting the resulting photos to Twitter under the hashtag #RealityClash - the company’s upcoming augmented reality shooter.

The winner, drawn at random in a prize draw, was Quincy Williams, who picked up £300 worth of cryptocurrency for his selfie.

The winnings can be used to purchase exclusive limited edition weapons to play or trade with in the AR shooter.

He wasn’t the only one to take a photo though. You can check out more selfies below, or over on Twitter under the hashtag #RealityClash.

Met these guys @PocketGamer and nearly got arrested! #RealityClash pic.twitter.com/M3c7k1Adhd

Having a great time at pocket gamer today. #realityclash pic.twitter.com/rK2NlEd5hq