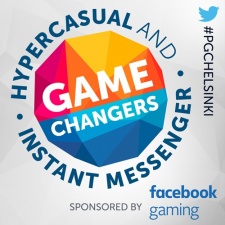 To pass the time until then we’re taking a peek at what’s on show and have plenty to choose from with 12 tracks on offer.

Today we’re looking one of our Game Changers tracks, with this one focusing on hyper-casual titles and messenger games.

Both are incredibly popular right now but it looks like they’ll be blowing up even more, as such the track is guaranteed to give any intrigued developers the inside scope on two trends that are already paying dividends.

10:00 – Kicking things off is a Superstar Session from Facebook director of games partnerships in Europe, the Middle East and Africa Bob Slinn on the social media giant’s Instant Games.

In a previous chat with PocketGamer.Biz Slinn explained that while it was still early in its journey it has seen promising signs.

10:20 – Next up is Treasure Hunt CMO Janos Perei with some insight into the marketing hurdles of hyper-casual games with a specific focus on acquisition and engagement.

11:00 – Following on is MojiWorks CEO Matthew Wiggins on messaging games and how to tap into their inherently social nature.

11:40 – CoolGames CEO Laurens Rutten follows after to provide a retrospective on Instant Games, with lessons learnt from the developer providing the substance to a talk all about the pitfalls to avoid.

12:00 – As we draw to a close Ketchapp chief revenue officer Christian Calderon will delve into a case study of basketball game Dunk Line.

12:20 – Finishing us off for the day is a panel all about the keys for success in hyper-casual and messenger games.

Those six talks make up just one track out of 12 the show will have on offer.