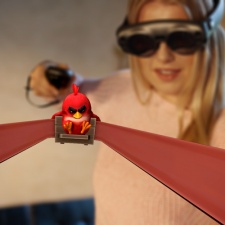 Rovio has teamed up with AR and VR specialist Resolution Games to develop a new Angry Birds title built for Magic Leap One Creator Edition.

Called Angry Birds FPS: First Person Slingshot, the title sees players holding a slingshot to fire the Angry Birds into forts - much like the classic gameplay the title is known for but this time in 3D.

The game is expected to launch in autumn 2018.

“Resolution Games has done an incredible job bringing Angry Birds to life in a new experience that will let players see and feel what it’s like to battle the pigs like never before.”

Mixed reality headset Magic Leap One Creator Edition was launched in August 2018 with a $2,295 price tag. The current edition is targeted at developers, with a consumer release expected at a much later date.