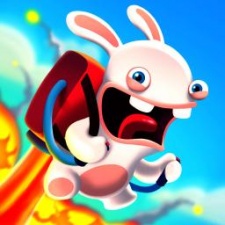 Rocket Rabbids has players rushing through hordes of enemies and deadly obstacles while searching for rockets that contain “legendary firepower”. Players have the option to dress their Rabbid in a number of crazy designs, as well as collecting stars to acquire power defense armour.

The game is currently in soft launch on iOS and only available in Canada at the time of writing.

The endless-runner looks similar to Ketchapp’s previous mobile game based off a popular Ubisoft IP, Prince of Persia: Escape, released last September. It suggests that Ketchapp may increasingly utilise Ubisoft’s IP in future as it looks to challenge other hyper-casual giants on the app stores.

Ubisoft has previously released a number of mobile titles with the Rabbids taking the spotlight. Rabbid Go Phone launched on iOS in 2010, followed by Rabbids Heroes, Rabbids Crazy Rush and Rabbids Big Bang.

In 2017 the manic mammals received their own virtual reality experience Virtual Rabbids: The Big Plan for Android.