Influential UK-designed games from the '80s and '90s featured 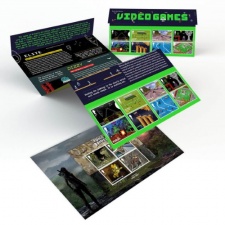 The UK's postal service, the Royal Mail, is celebrating the country's contributions to the games industry with a set of commemorative stamps featuring classic games of the '80s and '90s.

Elite, Dizzy, Populous, Lemmings, Micro Machines, Sensible Soccer, WipeOut, and Worms will all star on their own special stamps. The Tomb Raider series, meanwhile, will have a collection of four stamps, showcasing the series' evolution from the original game to its 2013 reboot.

The stamps are due to be released on January 21st, and will be available in over 7,000 Post Offices across the UK. Eager fans can pre-order the stamps on the Royal Mail website, with the complete set of 12 available for £14.25 (~$18.70).

"The UK has been at the forefront of the video games industry for decades. In the 1980s and 90s young designers grappled with coding on the new microcomputers and set the template for the industry with iconic games. We celebrate some of their landmark creations on stamps," said the Royal Mail's head of stamp strategy Philip Parker.

"This collection celebrates a selection of the great British video games that have helped define both the national and global development scene over decades," added Ukie CEO Dr Jo Twist.

"Video games are a key part of our cultural footprint and we’re pleased to see their contribution recognised in such memorable style."

Some of the UK's best-known developers, including Sensible Soccer creator Jon Hare, will be taking part in the Brightest Britain track at Pocket Gamer Connects London 2020. Be sure to pick up your ticket now!