'Merc with a Mouth' makes his debut 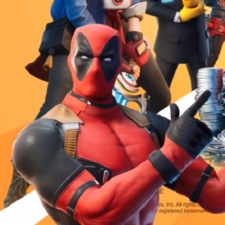 Update: Epic Games has confirmed that Marvel's Deadpool will appear as a "secret skin" in the battle pass of Fortnite Chapter 2, Season 2.

When players boot up the game, they should be able to find a not so "secret" space in the Battle Pass screen that has more Deadpool content. By progressing through the Battle Pass, the character skin can be unlocked for users to wear as they please in-game.

Original Story: Epic Games looks to have partnered with Marvel to bring the wise-cracking assassin Deadpool into the world of Fortnite.

As teased in a cinematic trailer for Fortnite Chapter 2, Season 2, the 'Merc with a Mouth' shows up in the final few seconds of the Battle Pass video.

No details have been provided yet on how Deadpool will be added into the game. DC villain Harley Quinn was recently introduced as an in-game skin, while fellow Marvel character and Avengers villain Thanos received his own game mode.

The announcement video has a distinct James Bond-esque theme, with characters from Fortnite acting and dressing as secret agents while receiving missions from a secretive overlay voice.

PocketGamer.biz has reached out to Epic Games for details of the partnership with Marvel as well as how exactly Deadpool will be implemented.

Fortnite previously collaborated with Marvel owners Disney, where it premiered a new clip from Star Wars: The Rise of Skywalker ahead of release.

Nike chief digital officer Adam Sussman recently left his role to take up the position of president at Epic Games.