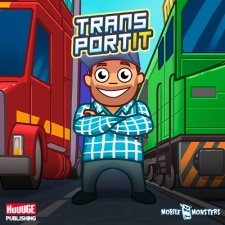 Huuuge Games publishing portfolio has a brand new addition called Transport It Tycoon. It is a fun idle game with a twist, developed by the talented Mobile Monsters from Germany.

"Mobile Monsters started out in 2012 with the idea to build a hotbed framework for build-up games. After 6 years and several iterations on how to approach our product and production strategy, we decided to take a pause," says CEO and co-founder of the company Julian Hühnermann.

"Just to come back in full effect and kick 2019 off with a completely new approach and reshaped production philosophy. Mobile Monsters focuses now on a rapid creation of game ideas while heavily iterating them on launch, and shaping the core game along with user feedback and KPIs."

The prototype of Transport It Tycoon was one of the games which truly standed out. Based on the early KPI results and player feedback it was clear that this game has high potential, but as it usually is with early versions of the game, it was also clear that there was a need for extra attention to optimise the whole player experience and, largely speaking, how the product monetises, not to forget marketability aspects and planning how to launch and scale this game.

Now after some good old coding, lots of tweaking and testing and of course teamwork between Mobile Monsters and Huuuge Publishing is about to debut worldwide on App Store and Google Play.

As highlighted by Mobile Monsters CEO, the cooperation with Huuuge was dictated by something more than business conditions

"While talking with Anton Gauffin, it became very clear that Huuuge and us share a mutual understanding of how to run things. From the get-go, our discussions centered around trust rather than business. With Huuuge's power ship, Mobile Monsters has the opportunity to get our creative - and sometimes crazy - ideas going and scale them up fast", says Julian Hühnermann.

"Our cooperation with Mobile Monsters is a giant chance for use to further penetrate the casual market. Not only has Transport It had stellar results since the very beginning, but also it is developed by a studio with massive experience and knowledge," comments Huuuge Publishing Director of Developer Relations Krzysztof Kusak.

"Furthermore, we are sharing a similar approach to cooperation and business. Thanks to that, our relation with Mobile Monsters is very strong and the game is being developed in great atmosphere which effectively translates to its results."

About Huuuge Games:
Founded in 2014, Huuuge Games is an international games developer and publisher, focused on the fast-growing multi-billion-dollar mobile gaming market. On their way to becoming the global leader in real-time free-to-play casual gaming, Huuuge is redefining the category genres with fun social experiences that give maximum joy and fun to a thousand million players all around the world.

Huuuge Games teams up with Universal Games for a Trolls game