The speaker lineup for our second online-only conference reaches its final form - read on to see who you’ll be learning from next week! 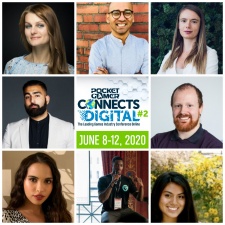 We can’t believe it's only days away! Pocket Gamer Connects Digital #2 goes live next week, Monday, June 8 to Friday, June 12, and we’re excited to share more expert speakers with you.

Following the success of our first online conference, our second edition promises to be even bigger. Over 1,000 industry professionals from around the world will log onto their computers to hear from more than 200 of the world’s leading authorities on 10 themed conference tracks.

Each track will be streamed live, recorded and be made available on demand, so you can interact with our speakers during their sessions, panels or keynotes through our Q&As, or catch up at a later time if you can’t quite make the stream.

We’ve already announced some incredible companies that will appear at the event, from Wargaming, Square Enix and THQ Nordic, to Tencent, King, Sega Europe, NCSOFT, to Unity, Microsoft, Bidstack and more.

This is our last speaker announcement before the big event itself taking place next week. Now the question is, who will you be learning from at Pocket Gamer Connects Digital #2?

The games industry, by its nature, is always in a state of flux. The current global situation has taken the industry into new waters previously unexplored. AppsFlyer’s Head of Sales EMEA Alexander Grach joins us for a superstar session where he looks at the state of mobile gaming in 2020. GameAnalytics CEO Ioana Hreninciuc delivers a keynote on 2020 so far, and how the mobile gaming industry is changing, while Unity Technologies’ Head of Managed Accounts EMEA Slava Taraskin lists his bold predictions for the second half of this year.

Agora.io’s Developer Evangelist Joel Thomas and Fingersoft’s CFO Markus Vahtola discuss how to replicate success moving forward with a panel. Speaking of triumphs, Kwalee’s Head of Development Simon Platt focuses his superstar session on how company-wide creativity made Kwalee a success. Looking back on the past and present, MicroProse’s CEO David Lagettie shares stories about how far MicroPose has come since its creation, in the company of ‘Wild Bill’ Stealey.

Publishing and the explosion of genres

The Art of Publishing is very much the theme of Pocket Gamer Connects Digital #2. Kwalee’s Hypercasual Publishing Manager Jake Parker is joined by Devolver Digital’s Founding Partner Mike Wilson and Teppo Soininen on a round-table, exploring the core relationship between publishers and developers.

Simon Prytherch explains how Rocket Sky! and OverTake are mobile hits, and how that was achieved by great collaboration between publisher and developer

Unity Technologies’ Client Partner (EMEA), Unity Ads Ilya Kuznetsov and Tamalaki’s Owner Martine Spaans feature on a panel where they look at what to do in the inevitable decline of ad revenue. Spaans also appears on a round-table discussion with CrazyLabs’ Consultant for Publishing and Developer Relations Nir Miretzky and Kwalee’s Head of Publishing Simon Prytherch as they share their guides for approaching a publisher. In addition, Prytherch heads his own session where he explains how both Rocket Sky! and OverTake are mobile hits, and how that was achieved by great collaboration between publisher and developer. He also appears on a fireside chat which focuses on the benefits of using a publisher rather than going it alone.

Agora.io’s Chief Revenue Officer & COO Reggie Yativ and Comunix’s Co-founder & CEO Or Ben Shimon unite for a superstar session titled ‘The Pokerface Explosion’, where they look at the app that changed poker. MyTona’s Business Development Manager Diana Korkina focuses her session on how to improve your game with your players, using the game Cooking Diary as a case study.

Olha Muzychenko and Sneha Vaidyanathan unite for a keynote on how hybrid monetisation deserves a hybrid investment strategy, and how you can supercharge your instant games revenue.

Facebook’s Strategic Partner Manager, Games Olha Muzychenko and Vertical Strategy Lead Sneha Vaidyanathan unite for a keynote on how hybrid monetisation deserves a hybrid investment strategy, and how you can supercharge your instant games revenue.

Xsolla’s President Chris Hewish and GameScribes VP of Production William Farrell list some of the best practices for keeping your PC game relevant on a panel with other expert speakers.

Voice chat is an increasingly prevalent form of communication in games. Agora.io’s Developer Evangelist Jake Priddy walks through the basics of how to build video chat in games. Meanwhile Square Enix’s Product Manager Karla Reyes talks about game production in a nutshell. In a time where working from home has become necessary in our industry, Creadits’ Co-founder Nick Gibbons walks through your virtual games arts studio.

ESL’s CEO James Dean discusses the impact of hosting esports events without an audience. Opera Event’s CEO Brandon Byrne features on a panel of experts where they look at how esports is filling the gap of the Olympics.

One of the features at Pocket Gamer Connects Digital #2 we’re excited about is the Pocket Gamer Connects Careers Week, which features expert speakers hosting sessions and round-table discussions on recruitment. Rovio’s Senior Studio Recruiter Alexei Ryan dedicates his session on how individuals can break in to the games industry, while also appearing alongside Critical Force’s Office & Talent Manager Miia Hakala, Academy of Interactive Entertainment’s Industry Relations Coordinator Cami Smith and Seattle Indies President Tim Cullings on a round-table where they pick out what companies are looking for in candidates.

Ryan also features on another round-table with Fingersoft’s CEO Celine Pasula and Games Factory Talents’ CEO Oleg Paliy, as they look at the best practices for world-class recruitment.

How do we go about inspiring the next generation of talents? Super Evil Megacorp’s CEO Kristian Segerstrale and Fellow Traveller’s Production Manager Des Gayle join other experts on a panel dedicated to this wide-ranging topic.

Get answers to all your questions

Pocket Gamer Connects hosts a huge variety of panels and sessions offering the very best insight and exchange of views from every angle. Topics range from working with independent developers, promoting growth even during lockdown, maintaining your culture while working remotely, improving your game with machine learning, mergers and acquisitions, and more.

Here are some of the latest amazing speakers confirmed to take part:

Don’t miss out and book your tickets now!

There’s still time to register for Pocket Gamer Connects Digital #2 if you book now! Don’t miss out on learning from some of the leading authorities in the games industry.

Because we know that indie developers have been hardest hit by the current global situation, we've reserved a selection of free tickets for small studios. If you think you qualify, please apply now.

Who do you want to see speak at a future Pocket Gamer Connects event?

Wargaming, Square Enix, THQ Nordic, The Pokémon Company and Wizards of the Coast all confirmed to speak at Pocket Gamer Connects Digital #2