Rovio will close servers in February 2021 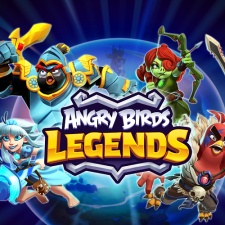 Update: Rovio has subsequently confirmed that work on Chronicles of Legends has ceased altogether. In fact, production of this version without the Angry Birds IP being utilised stopped earlier this year.

As revealed via a blog post, the decision has been made to not continue production of the previously soft-launched title after the studio confirmed that the game was not where they wanted it to be and therefore felt a full release wasn't warranted.

Angry Birds Legends saw mysterious dark forces being thrown into the Angry Birds world, as the ongoing battle between the creatures and their piggy nemesis rage on. Players were tasked with collecting and assembling a team of heroes, which would then be levelled up through treasure. The free-to-play game also featured a premium battle pass.

The final update has rolled out, making the battle pass free for everyone as well as adding daily events to collect different resources.

All in-app purchases have been removed from the game, with Rovio allowing any in-game funds to be transferred to other titles in its catalogue. Any purchases made after November 5th, 2020 will be automatically refunded before the servers are shut down for good in February 2021.

"We have worked hard to deliver you the best Angry Birds experience. Sadly, we realise the game is not where we wanted it to be and we have decided to stop working on it."

"We want to thank all our players that have played Angry Birds Legends during this Beta period, and all the players that took the time to share in the community their thoughts and suggestions! It really meant a lot to us!"

PocketGamer.biz has reached out to Rovio for comment regarding Chronicles of Legends development and whether it too is impacted.

Even before then, Rovio cancelled monster-collecting puzzle RPG Phoenix Rangers, citing the game wouldn't be "able to reach the level of success they were aiming for" and further reiterating the developer's stance to only launch a game that hits its standard.