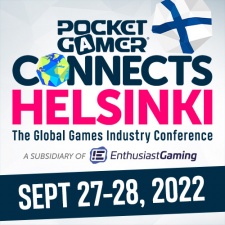 Did you know that if we were to look exclusively at population size versus national revenue generated by video games, Finland would be number one in the world?

This is all possible even with only 260 Finnish games studios contributing to these figures. The Finnish games market has exploded over the past few years, garnering €2.4 billion in 2020. There’s no time like now to get involved and make connections within this massively expanding market, and we have the stage set for you to do just that.

This September 27 to 28, we’re bringing Europe’s leading mobile gaming conference Pocket Gamer Connects, to Helsinki for two days full of countless networking opportunities, an abundance of insights from 200 world-class speakers and an abundance of curated matchmaking events. Over 1,200 games industry professionals from all over the globe will be descending upon Helsinki this fall to hear our world-renowned speakers speak on all the most pressing topics facing the industry today across 19 content tracks on three stages, granting all attendees full access to 36 hours of unmissable conference content.

Join us in Helsinki this September and connect with over 650 leading companies representing 40 different countries. There’s still time to take advantage of our limited time Early Bird discount and secure your ticket with £290 off, so head over to our website and make the most out of this fantastic deal.

Keep on reading to learn more about the games industry in Finland’s successes thus far and where it’s headed!

How did we get here?

Finland tauts the title of being one of the fastest growing games industries in the global market, and it has produced numerous spectacular games from remarkable developers since its inception. A key to Finland’s growth was its focus on mobile games development, starting with the iPhone App Store’s launch back in 2008. Finland got a head start and fully began to leave their mark in the mobile gaming market.

Finland’s place in the mobile gaming world stage was solidified with the release of Angry Birds back in 2009, which has now become a world phenomenon and top franchise in mobile gaming history. When summarising the overwhelming success of the Finish game industry, focusing on Helsinki as a European tech powerhouse in particular, The Helsinki Times attributed it to creativity breeding creativity.

The Finnish government actively contributes to this growing economy through sponsoring start-ups and game studios, setting them up for prosperous scaling and success. Beyond this, the success is also attributed to the unique culture of openness embracing a less hierarchical format to networking – in Finland, game developers are encouraged to approach anyone regardless of job title or position, rather than viewing them as unapproachable or, in other cases, as competition. This abundance of collaboration has created endless possibilities of new connections and open networking for gamemakers in Finland!

Even despite the ongoing COVID-19 pandemic in 2020, the industry showed growth of around €500,000. This was confirmed by the Finnish Game Industry Report.

Furthermore, of 200 Finland-based studios, 46 made a turnover of over €1 million. For context, this was an increase of about 36 percent compared to 2018. The Finnish games industry employed over 3,600 people in 2000, with 28 percent of this number were from outside the country and 22 percent being women.

Beyond the prospering success of Finnish studios, game players in Finland are also abundant. Finland touted over 2.8 million gamers back in 2020, which is over half the country’s population. A huge 86% of these gamers play on mobile, versus 77% on PC and 76% on console. Female gamers are also paving the way in Finland, as they are driving the country’s higher rate of in-game currency buyers, with 32% buying in-game currencies compared to only 17%.

According to a study conducted by Newzoo Expert, the top played franchises in Finland are the following:

For context, Finland is a country with 5 million people and only 240 game developer studios, yet they garnered a whopping €2.4 billion in annual gaming market revenue in 2020. It has increasingly become a magnet for leading games companies from all around the globe, and is now home to top companies such as Ubisoft, Electronic Arts, Epic Games, Huuuge Games, Zynga and more. It’s a trailblazer, and considered the spiritual home of mobile gaming for a reason – there’s no time like the present to get involved.

Global phenomena, made in Finland

For such a small country, Finland has left a notable mark on the video games world stage. Here are just a few of the incredible titles that were made in Finland:

Book your tickets to Pocket Gamer Connects Helsinki 2022
Ready to join us for our biggest iteration of our Pocket Gamer Connects Helsinki show ever? You can still get a massive discount when you book your tickets today, so don’t miss out on this unmissable opportunity to visit the spiritual home of mobile gaming and connect with some of the most innovative companies in games. Save up to £290 with Early Bird prices - but hurry, it’s only available for a limited time, so don’t miss your chance to take advantage of it today.

Can’t join us in Helsinki in person next week? No problem, join us anywhere in the world as a virtual attendee!