“More Chinese companies are going to focus on publishing games abroad to avoid restrictions at home.” 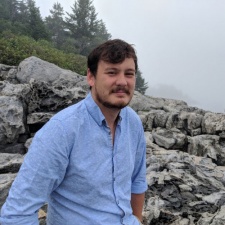 Gabriel Meredith has a background in History and Archaeology. Growing up in China and being surrounded by ancient sites, coupled with playing video games like Civilization and Age of Empires, he became fascinated by the art and culture left behind. For Meredith’s bachelor's, he studied Art History at the University of Michigan. He then went on to work at a museum in Baltimore, curating two exhibitions from their Asian Art collection. Meredith continued on with Archaeology for his master's at the University of London's School of Oriental & African Studies. After Meredith’s master's, he decided to move back to Asia and pursue my lifelong dream of starting a video game company with his family.

Meredith joins us for Blockchain Gamer LIVE! Digital #1 where he will be looking at the future of blockchain technology in gaming.

Before the event takes place next month, we caught up with Meredith to see what’s changed in the games industry since he joined, and what trends he expects to see over the next 12 months in the industry.

PocketGamer.biz: Tell us a bit about Merfolk Games

Gabriel Meredith: Merfolk Games is an Asia-based game publisher specializing in blockchain strategy games. With its headquarters in Hong Kong and a subsidiary game design studio in Shanghai, it aims to be a major player in the blockchain field by creating innovative experiences using emerging technology and cutting-edge game economics. CryptoCrusades, its flagship project, is a mobile game releasing Q4 of 2020.

As the founder and CEO, I manage the big picture direction of the games we work on, as well as the business aspect of the company, from attending talks to meeting with potential business partners. Since our team is split between Hong Kong, Shanghai, and San Francisco, it's part of my role to keep everyone connected and in the loop. With my research background in history, I also spend a lot of time sifting through potential objects and designs from different cultures of a variety of eras. I now know way too much about medieval catapult blueprints.

It's always been kind of obvious to me that games are my passion. While I love the research world of museums and academia, I feel like it sometimes fails to capture the imagination of non-academics. Science museums are fun and interactive, but it's hard for history museums to have that kind of appeal. What has been successful in evoking wonder and excitement for history is video games. The kind of immersion that games can facilitate really gives players a deep understanding and connection to something as immaterial as a culture of a bygone time. The introduction of cutting-edge technologies like blockchain are exciting to me because it feels like a whole new aspect of video gaming that is waiting to be explored. My goal is to bring history and culture into that space.

If you know it's what you want to do, then go with your gut. Do your research, work on your skills, and reach out to the companies you want to work with. Most importantly, go to events and meet people in person. Don't just send in applications, actually go have conversations with the people in the industry.

It's hard to analyse the entire world's games industry as one whole, but there are a couple of trends that I find applies to most countries. Firstly, the games industry is still growing at a pretty significant pace, both in users and in revenues. Secondly, political changes have affected the industry, in particular authoritarian trends, tightening of restrictions, and xenophobic trade practices.

The games industry is constantly evolving. People's tastes, global politics, technological breakthroughs, these kinds of factors change the playing field every day. My guess is that more Chinese companies are going to focus on publishing games abroad to avoid restrictions at home. Previously catering to a billion-strong market, this will not be a small deal. During this influx of Chinese games, many of these companies will probably fail to adapt to local tastes and political barriers, but others will succeed. In other words, we will probably see more TikTok-level successes with Chinese apps and games.

I think we've seen a lot of indie developers making it big, and with it pushing the creativity of the games industry as a whole.

When I joined the Pocket Gamer Connects event in Hong Kong last year, my favorite part was definitely meeting other people in the video games industry. I think these types of events foster a really positive community that's open to collaboration. Everyone I've met has been excited to help out and brainstorm ideas together. Even though this time it will be online, I'm still looking forward to meeting people. When I joined Pocket Gamer's online roundtable discussion a few weeks ago, I didn't expect the backstage hangout to be so much fun and so helpful. It really boils down to the positive environment that I love about Pocket Gamer.

Hear from the likes of Facebook, WarnerMedia and Supercell at Pocket Gamer Connects Digital #7