How Township, Fishdom and Gardenscapes are growing the studio's reputation 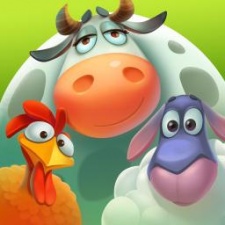 Those who attain the status of leading mobile game developers do so over many years and across multiple games.

Flappy Bird was indisputably the biggest mobile gaming phenomenon of 2013, but few would now list its developer .Gears among the industry's key figures. Though the talented developer Dong Nguyen still attracts plenty of interest in his story and upcoming projects.

And even for Pokemon GO studio Niantic, there's a sense that only a follow-up hit under different circumstances will be enough for the team to be inducted alongside the Supercells, MZs and Kings of the world.

But one developer who's been taking quiet strides towards establishing itself as one of the industry's biggest players is Russian studio Playrix.

With a background in casual PC titles, the firm has been releasing games on mobile since 2010. Back then its releases used the premium model, but it's been with its more recent F2P releases that Playrix has really begun to grow its reputation.

Leading this charge has been Gardenscapes - New Acres, a match-three title which can count Wooga CEO Jens Begemann and Tribeflame CEO Torulf Jernström among its many fans. It was also named by Facebook as its Overall Game of the Year for 2016.

Launched on August 25th 2016, the game was in the top 50 US iPhone grossing charts by September 4th and barring the odd slip - it occasionally dipped into the low 50s in September 2016 and sunk to 68th on February 18th - it's been there reguarly.

What's most surprising is the way the game has remained so consistent, its grossing position actually rising slightly, over so many months.

The studio's abilities can be shown in the rejuvenation of its older titles.

It averages between 20th and 30th in the US iPhone top grossing, going one further in the UK with a peak of 11th and an average position between 10th and 20th.

But while Gardenscapes - New Acres is Playrix's flagship title, it's also been out for less than a year. Indeed, perhaps a more telling example of the studio's abilities can be shown in the rejuvenation of some older titles.

Take Township, for example. Launched in October 2013 and looking every inch the standard, casual builder title, few would have anticipated the game performing at the top for as long as it has.

In fact, its performance in the US iPhone top grossing charts has never been better. From launch to July 2015, Township was a decent but unspectacular earner for Playrix, largely ranking between 200th and 250th.

And like Gardenscapes, Township is even stronger in Europe. As of May 14th, it sat at 32nd in the UK's iPhone top grossing charts and 12th in Germany's.

Township has remained in Russia's top 50 for more than a year.

In Russia, Township also saw a boost in 2016 and has remained in the top 50 on the country's iPhone grossing chart for more than a year now.

This is doubly remarkable given the fact that the game took more than two years to even record a Russian iPhone grossing chart position within the top 50.

It's a similar story for Fishdom, which launched in December 2015. Fishdom performed better right off the bat than Township, entering the top 100 on the US iPhone top grossing chart on January 12th 2016 and largely remaining in positions between 100th and 50th ever since.

The same can largely be said of Fishdom's performance in the UK and Germany, but in its native Russia it's been even more impressive, remaining consistently in the top 20 and often the top 10.

In the months following Fishdom's release, Township's top grossing position also went up, suggesting either a new lucrative approach to external UA activities or successful cross-promotion within its portfolio.

However, this portfolio isn't exclusively made up of success stories.

Sky Charms is the outlier, launching in May 2015 and rarely even registering on the top grossing charts. It peaked at 729th in the US iPhone top grossing on April 19th 2016.

Sky Charms has performed better in Russia, peaking at 145th on July 31st 2016, but its overall performance has been patchy at best, with the game either not registering at all on the charts or popping up briefly around the 1,000th mark.

However, this is the exception rather than the rule. Sky Charms' apparent failings only stand out so much because its stablemates have performed so brilliantly.

Playrix has gone about its business quietly, and many of its successes have gone uncelebrated.

The clear pattern, and one that no single failure can blemish, is that Playrix has become a best-in-class mobile games studio for maintaining - and, more impressively, actively improving - the profitability of its free-to-play games long after launch.

It's rare enough to see a mobile game that manages to avoid a rapid drop-off in its grossing position after its first year or so, but one that actively builds on it is a rare beast indeed.

The fact that Playrix has managed to do this even with 2013's Township bodes well for the future of newer titles like Gardenscapes - which itself is already on an extremely promising trajectory - and whatever the studio releases next.

It's gone about its business quietly, and many of its successes have gone uncelebrated, but Playrix is a company whose stock is rising in the mobile games industry.

As long as it continues competing with the biggest names in the grossing charts, soon Playrix itself could become synonymous with mobile gaming success.