How to wheel and deal in Rusty’s Real Deal Baseball 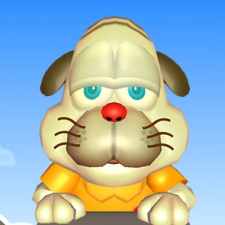 This week, we take a look at Nintendo’s free-to-play collection of mini-games Rusty’s Real Deal Baseball.

From the off, Rusty's Real Deal Baseball exudes the trademark charm and retro-focus that’s been Nintendo's bread and butter to date.

After downloading Rusty’s for free - and odd experience for many 3DS owners - Real Deal Baseball opens up with an immense amount of tongue-in-cheek charm that pokes fun at "Nontendo" and its gimmicky "4DS" handheld.

But behind the curtain of cheap laughs waits Rusty, the hangdog palooka of a store owner who needs to sell video games to put food on the table and - hopefully - patch up his rocky marriage.

It seems odd for players to know this much about Rusty given that he exists to sell them games, but it's all integral to the key hook of Real Deal Baseball: haggling.

Players only receive a demo for the smarmily named Bat & Switch mini-game when they begin their career in Rusty’s, and they're quickly led back to Rusty's store to purchase the full version after all available challenges are cleared.

Its price - and the price of the nine other mini-games - is $4.00, but players are quickly told that they can talk Rusty down from this figure. All games can be purchased for the full price if you charge through menus, but haggling is very much a part of Rusty’s Real Deal Baseball and you're actively discouraged from paying the full sticker value.

There are two main incentives to make in-app purchases in Rusty's Real Deal Baseball: to play new mini-games and to experience the story.

If you're dead set on freeloading, your time with Rusty's will be brief as you're gated firmly after the demo for Bat & Switch expires. For those willing to make purchases, however, Rusty’s takes a very relaxed hand at pressuring players to buy more games.

Which isn't to say it doesn't chide and poke them from time-to-time, but if you haggle Rusty down to $2.50 for Bat & Switch and decide that's the only game you'd like to buy from Real Deal Baseball, you won't be confronted with pop-ups or cut-scenes temping them to buy more titles.

If you're dead set on freeloading, your time with Rusty’s will be brief

Players who opt for this route will, however, miss out on the "aw shucks" story of Rusty, a tragic, Job-like figure who's beset by an increasingly comedic amount of problems the harder he tries to patch up his life.

Cleverly, Rusty's story only advances as players buy new mini-games from his store - so for players who absolutely need to know what will happen to Rusty, there's a fair amount of pressure to buy the five story-driving games.

On the topic of clever, Nintendo really shows the guile it's capable of with Rusty's Real Deal Baseball.

While you could, theoretically, purchase everything in Rusty's Real Deal Baseball for $40 ($4 x 10 mini-games) - you're encouraged throughout every aspect of gameplay to haggle the price down.

Playing enough mini-games earns you donuts and items you can use to persuade Rusty to lower his prices - but you'll also need to chat him up a bit. By navigating this process, you can walk away with a new mini-game that's often discounted by at least 50 percent of its original asking price.

Each game has a set minimum price that players cannot go below, however, so there's no getting around the need to exchange hard currency for a new mini-game.

Certain "side" mini-games, ones that won't advance the story, require players to use discount tickets (coupons) instead of haggling - but the end result is the same.

This adds a potential level of value to each in-app purchase, however, as players are likely to feel that they genuinely received a good deal on each mini-game they buy.

Furthermore, each mini-game opens up a new style of play in Rusty's Real Deal Baseball and so it's difficult to view them as anything other than a good value.

In order to address the experience in Rusty's, the game needs to be broken down into two parts: the gameplay itself and the haggling.

The gameplay of Rusty's is quite fun and casual friendly, and feels a good deal like a collection of Wii Sports mini-games.

While each has an undeniable baseball theme to its action, Nintendo quickly breaks away from the batting cages and has players do all manner of silly, fun games like whacking at a giant stack of colour-coded tires and carving their own baseball bats.

Although each game provides a satisfying amount of challenge for its asking price, they're not the sorts of games you'll lose yourself in for hours at a clip. Instead, they're short, snack-sized pieces of gaming that pull your Mii right into the action.

On the haggling side, Rusty's really hits it stride.

I didn't think it'd be possible for a game to make the process of making in-app purchases fun, but there really is a fair amount of enjoyment to be pulled out of Real Deal Baseball as you talk Rusty through his troubles.

Like any good friend, you'll need to know when to give Rusty advice, when to let him go on about his hardships, and - most importantly - when to offer him sugary, fried treats when things get really grim.

At its full $40 asking price, Rusty's Real Deal Baseball would feel like a lacking game experience.

Once a player wises up to haggling tactics, however, it's entirely likely that they'll walk away with all 10 mini-games that Rusty's has to offer for $16 - $18 dollars, which feels about right for what Real Deal Baseball delivers.

I started off my playtime with Rusty's with exactly $11.45 in eShop credit left on my account. After semi-aggressive haggling, I managed to pick up 6 mini-games for $11.46 - thus requiring me to add $0.01 to my eShop account to complete the transaction.

For the purchase price, I felt like I definitely got my money's worth.

Another point worth mentioning here is that Rusty's does not provide a demo for every mini-game, so in some cases players won't have a good idea of what they're purchasing until after the transaction is complete.

As noted earlier, Rusty's might struggle to hold a player's attention for longer play sessions - but it's a fair companion game to have on a 3DS for quick play sessions before, or after, a more involved game.

Rusty's does hit a bit of a sour note in that it doesn't offer enough free gameplay early on to entice players into spending - and it's firmly gated before the first in-app purchase.

However, because it's marketed exclusively to Nintendo 3DS owners - it's likely that these players will be willing to trust Nintendo to deliver a quality game in terms of enjoyment and challenge.

In this regard, Rusty's does not disappoint - but without this trust from the players, it would be difficult for a non-Nintendo game to succeed with non-Nintendo players using a similar, ambitious monetisation strategy.

How does Pokemon GO monetize compared to Miitomo?

Nintendo could grow revenues by $2.5 billion from IAPs and subscriptions, says Newzoo