Chart of the Week: Even at Christmas, mobile games outsell portable games

3DS and PS Vita just haven't connected with their audience, and the reason is clear...

But just to underline the fact, App Annie and IDC have looked at the global revenue generated by portable gaming devices and compared it with that from iOS and Android.

Losing on your strongest hand

Significantly, this was for the October to December 2012 period.

Of course, this is the biggest quarter for mobile game revenues, but it's a much more important period for the portable games sector on a relative basis, accounting for 60 percent of annual sales.

And if that wasn't enough, advertising revenue was also ignored; so this graph just looks at app store monetisation. 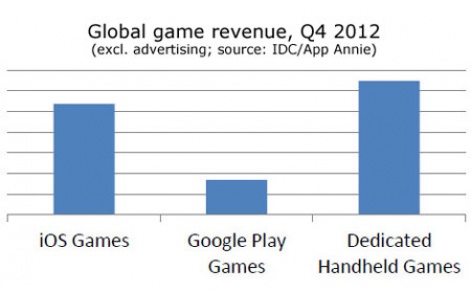 The result is a clear win for the combined iOS and Google Play total; something that's only likely to accelerate in 2013 as Google Play strengthens.