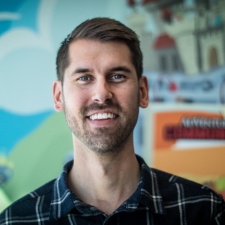 Tristan Rattink is head of studio at Hyper Hippo.

So here we are. AdVenture Capitalist has just turned five years old. When it launched back in 2015, it bucked the trend of idle games, capturing people's attention through its quirky and engaging gameplay, and inspiring hundreds of lookalikes and innovators in the space.

Today it has amassed more than 55 million mobile downloads worldwide. We've launched it on six platforms, turned it into a card game, made a capitalist costume, and even made a follow-up, AdVenture Communist.

Like all good parents, it's both humbling and rewarding to see how much our baby has grown. You can't replicate success without first understanding what went right. So, why are players still tapping buttons and watching zippy progress bars five years on?

I think it has a lot to do with execution, branding, listening to your audience, and the delicate art of game balance, and ad monetization. Stick around, and I'll tell you why.

Like many other good origin stories, AdVenture Capitalist very nearly didn't happen. After the failure of Mech Mice, we came together as a studio to work on a bunch of ideas. At the time, we decided to let our developers choose which games they wanted to work on (we've learned a few things since then) -- and AdCap was the least sexy idea.

AdCap was the least sexy idea. No one wanted to work on it.

No one wanted to work on it. But, Cody, the game designer who pitched it, was insistent that he'd got something great on his hands. So, we gave him a couple of weeks to learn Unity and build a prototype.

We knew it was a good idea when we looked around the office and saw that everyone was playing it. But ideas on their own aren't enough. It was only when we took the time to sit down and polish that idea, that we started seeing results.

Cody realised he needed a producer, so he called me in. We covered the walls in sticky notes, and we planned out everything from features to marketing. And slowly, through a great deal of persistence, we got everything done. The fact we're still here after five years has a lot more to do with the execution, testing, and continued refinement of the game than it does that initial concept.

One of the great things about AdVenture Capitalist is its mass appeal. Most people dream of making billions of dollars, and this game lets you do that. You start with a single lemonade stand and grow your capitalist empire to include hockey teams, oil companies, and even get to take your business to the Moon and Mars.

When we launched, every other app out there had a Viking on their icon. We had a man with a monocle and a top hat.

At Hyper Hippo, we pride ourselves on quality. I'm not talking about fancy graphics here (we had an artist part-time on the project at first, but we didn't even have a UI/UX designer initially). But we did focus on style and charm. We introduced this dapper 1950s character who stood out against a lime green background, and we added humour through the voice and tone.

That intersection between universal appeal and a unique brand feel and tone makes AdVenture Capitalist stand out in the market.

Your Audience Will Inspire You — Even the Haters

When we launched, every other app out there had a Viking on their icon.

One thing that makes an idle game appealing is the ability to play them during the gaps in your everyday life. If you're an idle gamer, you're probably playing a few different mobile games at the same time as well as a bunch of different titles on multiple platforms. I know I am.

When we set out to build AdVenture Capitalist, we had a certain audience in mind. The barrier to entry for the game is pretty low, and over the years, we've learned that it's a much wider demographic than we expected. It's not just casual gamers - we also see a mid-core audience engaging due to the strategic decision making and obsession with min/maxing these games.

We wouldn't be here without our players, and we make a point of listening to all of them - even the haters. Of course, we use data to reinforce a lot of decisions, but we temper our data-informed perspective with the voice of our community.

Thanks to our player experience team, who keep a close eye on social and forums, we've picked up a lot of feedback and suggestions that we've implemented directly into the game. Players often bring a unique insight, and working together increases performance and LTV.

AdVenture Capitalist is wildly addicting, and game balance is obviously a huge part of that. There's a sense of progress and achievement, whether you come back after 20 minutes or a day. We put a lot of work into balancing the game to make sure every interval is a positive experience for the player.

Automation would make producing the game a lot easier, and there are thousands of idle games out there that rely on it. But automation makes games boring, so we don't do it. It's like storytelling; watching or reading a predictable, linear story isn't fun. It needs to speed up and slow down at certain points. You shouldn't be able to expect it.

We take the time to balance everything manually to make sure every interval is interesting and more realistic. It’s a slow process, but it's worth it.

Automation makes games boring, so we don't do it.

Rewarding the Gamer Rewards the Game

Five years ago, mobile games were just starting to come into their own, and in-game advertising was still pretty new as far as a viable or at least complementary monetization model. When we first discussed adding rewarded video ads into the game, we set a rule that the value proposition for the player must be blatantly obvious. The return should be so good, that it would be a no-brainer to exchange 15-30 seconds of your life for watching an ad.

Advertisement bonuses are a great exchange between the player and the developer because the payoff is mutual. As a developer, ads give us revenue that allows us to continue producing the game we love, and provide incentives that keep our players returning to play them. In return, the players regularly get fresh content and payouts of enhanced game progression or in-game currencies.

Through data and audience feedback, we then find the sweet spot, so players engage our ads, feel rewarded, and don't get fatigued. It's a fine balance that I think we struck almost out of the gate with AdCap.

There's a lot of room for innovation left in the idle game genre, but that's a discussion for another time. Whatever the future holds, I'm sure it won't be boring!

Are you interested in working with Hyper Hippo Games? Check out our latest jobs today.