5 games on Android Market have clocked up more than 250,000 downloads

May 27th, 2011 - 01:21am
By Keith Andrew
With its total nearing 300,000 apps, Android Market appears to be the one valid alternative to the App Store for developers looking to make money.

Closer inspection, however, suggests that, while its library is building at a pace, the audience needed to support its growing roster of apps isn't yet there.

That's the charge made in Distimo's monthly look at the most prevalent app stores.

In particular, a series of stats comparing the two marketplaces suggests that the number of apps with downloads in the millions on Android Market remains relatively few.

In fact, only 96 releases on Android Market can claim to have notched up 5 million or more downloads.

When it comes to paid apps, the number drops further even when the bar is lowered: just two paid apps have passed the 2 million downloads mark according to Distimo's numbers  a figure 6 App Store titles surpass every 2 months in the US alone. 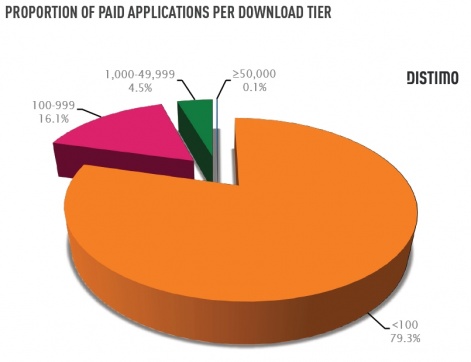 It paints a picture of a marketplace that's fast becoming flooded with titles, but one where managing to hoard enough downloads to generate significant revenue is especially difficult.

As Distimo puts it, paid apps simply have a higher chance of reaching high download volumes on the App Store than they do on Android Market.

It's a dire situation that remains in place when it comes to games, too.

"There are five games in Google Android Market with over 250,000 downloads worldwide," Distimo states.

"In the App App Store for iPhone, 10 games generated more than 250,000 downloads in the United States alone in two months."

The reason? Distimo suggests that one factor is the slower rate at which Google updates rankings on the marketplace compared to the App Store.

The firm claims 94 distinct iPhone titles made the top 10 paid charts in the US throughout the course of April.

On Android Market, the comparative figure came in at 26. 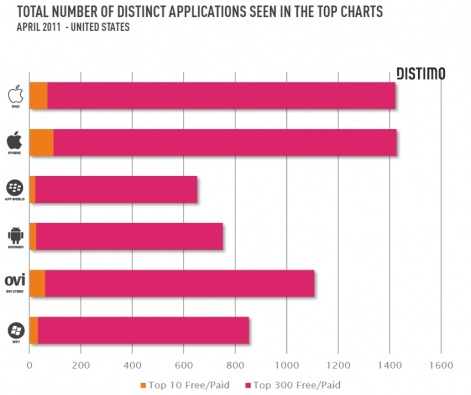 "Google recent made major changes to the web storefront of the Google Android Market," the firm concludes.

"It now displays more local content and top new and trending charts. Perhaps these, and future changes, will provide a higher probability for success for a larger portion of the applications in the Google Android Market."