April 25th, 2012 - 11:06am
By Keith Andrew
Tapjoy's support for incentivised adverts is anything but surprising, but according to a report published by the firm, mobile consumers are now on board too.

Said study, dubbed the 'Tapjoy Consumer APPitude Report' suggests that, not only are consumers now comfortable with in-app ads  45 percent of those who have seen ads claiming to have clicked on them  they're also "embracing" those that come with incentives.

In all, the paper claims adults between 25 and 34 are more likely to value the influence of adverts, both recalling more ads than users in other age groups and standing as the group most likely to click on them  half of those questioned admitting to doing so.

Additionally, 28 percent of people aged between 25 and 34 claim to have followed an ad to download another app, with 29 percent of adults aged between 18-24 admitting to having done the same thing.

Interestingly, Tapjoy also makes judgements about the kind of rewards users like to receive when they interact with ads, claiming many respondents also reported they would be "even more willing to click on ads if they were able to choose which ad they could view."

The firm also reports many users prefer receiving premium game content, credit or new apps as a reward than cash or gift cards.

In all, 68 percent of those asked were "positively interested" in picking up virtual currency through clicking ads in game.

Furthermore, 32 percent would opt for virtual currency over real money if given the choice. 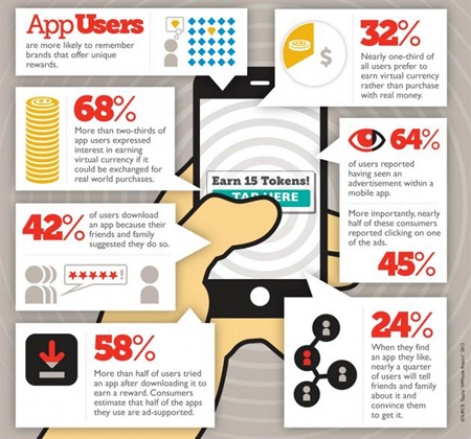 The full report can be downloaded from Tapjoy's website.

64% of Millennials spent more time mobile gaming in past year