Global mobile games industry forecast of $103.5 billion in 2022, according to new report from Newzoo 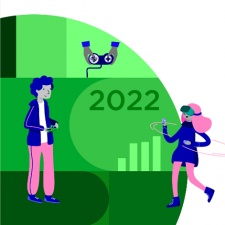 A new report published by Newzoo shows a strong year projected for the global games industry, with forecast growth of 2.1 per cent overall.

The primary driver for this growth is the mobile market, which will generate $103.5 billion this year – a 53 per cent market share.

PC gaming also experienced modest growth of 1.6 per cent, while the market share for console gaming declined by 2.2 per cent. The strength of mobile growth is cited as a primary factor in avoiding a steep overall decline for the global games industry.

The forecast shows that the games market will continue to increase over the coming years, reaching $225.7 billion by 2025. This signals healthy growth in the current economic climate, despite increasing at a slower pace than the games industry experienced during the pandemic. Mobile gaming experienced particularly strong growth during this time, with a 63 per cent rise – 75 per cent of which has been maintained.

The report states that continued supply chain issues and the different working conditions have led to delays for many titles which began development during the pandemic, as well as continued supply shortages for the latest generation of consoles and PC components. The quicker development time and less taxing technical requirements for mobile titles mean that the mobile sector has largely been able to avoid these issues, accelerating its growth over other platforms.

However, the report states that the console market will see significant growth in 2025, due both to the alleviation of supply chain issues and the release of many delayed titles in 2023 and 2024, reinforcing the resilience of the gaming market.

A free version of the Newzoo Global Games Market Report 2022 is available to download now.