Reading List: Free-to-Play: Making Money From Games You Give Away 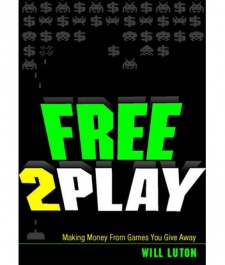 In a first for PocketGamer.biz, we've decided to do a book review.

To-date there haven't been (m)any books about mobile gaming, but that's something which is certain to change in future.

And Will Luton, one-time creative director at UK studio Mobile Pie and a PocketGamer.biz columnist, now turned consultant and all-round industry gadfly, has got into the market quickly with his book Free-to-Play: Making Money From Games You Give Away.

In terms of structure, the beginning is pitched fairly low; at least for regular PocketGamer.biz readers.

These foundations are useful, however, setting out the industry's building blocks and providing structure for the later chapters.

Indeed, it could be argued this is the book's strongest aspect.

Apart from large interstitial pull quotes from various commentators and the introduction from NimbleBit's Ian Marsh, this isn't an annecodotal read, nor does Luton get involved in the specifics of individual titles.

Instead, he brings an abstract approach to the main topics of interest, starting with free-to-play gameplay and moving through monetisation, analytics and marketing.

This ensures readers understand enough of the details for their knowledge to be useful, but not too much for it to be confusing.

In this way, it's not a book you'll want to read straight through. Like a free-to-play game, it's naturally broken down into smaller bite-sized sections.

Perhaps the best way to describe it would as a primer to the free-to-play game industry.

Those already well-experienced in the field will enjoy Luton's logic, if not learning much new. Everyone else - especially those just venturing into the business model - will get a good education.

Free-to-Play: Making Money From Games You Give Away is out now, priced from £10.04 for the Kindle version via Amazon UK or from $15.17 from Amazon US.

You can also hear Will Luton's views on free-to-play gaming below.