2014 Preview: 5 mobile predictions that will almost definitely come true in 2014 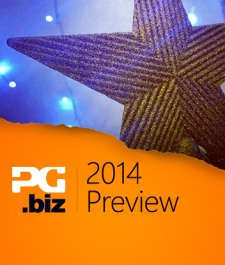 You might think you've got it hard working on your games, pushing your analytics or selling your ad networks as you stumble back to work still intoxicated from your New Year's bash, but have you tried being us?

Imagine sitting down at your laptop on 2 January and attempting to pull out predictions from the back of your mind for the 12 months ahead.

Can you picture the pain? The torment? The pressure? It's how Pachter must feel every day of his life.

So, instead of devoting all too much time to gazing into our crystal ball and serving up sound and logical projections, we decided to go with gut feelings instead, laying out the five things that will almost definitely happen in the world of mobile gaming in 2014.

Well, they might happen. There's a chance. You can't deny some of them are possible, perhaps even plausible. Just, don't hold us to them, or tell anyone where you read them when they prove to be spectacularly off the mark, okay?

Prediction 1: The freemium debate will die down

Having blasted out of the traps in late 2008, one of the lines industry luminaries were keen to push in 2013 was that smartphone gaming had moved out of its initial early phase and was now starting to 'mature'.

Anyone who has sat through the endless debates about free-to-play on Twitter, however, will note that maturity is rarely a fixture.

Things are going to calm down in 2014, however. Not because free-to-play's critics are going to melt away, but because developers currently churning out F2P games almost by default are going to wise up, realise that it's not a one-size-fits-all model and is best left for a select band of titles.

2013 was a year when F2P's prominence was hard to ignore: the year's three top titles  Clash of Clans, Puzzle & Dragons and Candy Crush Saga  were all high profile free releases. Little wonder, then, that the allure of securing a large audience by going free was too much for most developers to ignore  even if the games they hacked apart to do so were often utterly unsuitable.

The end result was, there were a number of prominent F2P games that simply didn't work, each one serving as perfect trump card for those wishing to dismiss the entire model is those aforementioned Twitter debates.

In short, bad F2P games help nobody  they're unlikely to bring in high revenue rates longterm and, instead, trashes the model's image for everybody else.

At some point in 2014, the industry is going to realise this, and  if we may be so bold - publications less scrupulous than this one will finally stop pitching it as some kind of digital gold rush.

As the market becomes used to free-to-play simply being an option rather than a default setting, so its detractors will become less vocal and the industry as a whole will finally become a little bit more (dare we say it) 'mature'.

Prediction 2: Kickstarter will get the kick

From the start of 2013 right up until the summer, there was a fair chance that any fresh faced developer who approached PocketGamer.biz at any event around the globe would open with one line: So, we've got a Kickstarter.

In the last few months of the year, however, things started to change. Kickstarter was still mentioned in these conversations, but developers would instead open with We had a Kickstarter a few months back  why didn't you cover it?

One conversation that sticks in our minds was with a developer at Game Connection who told us he had worked on an anti-bulling game  an interesting concept, we replied, that we were pretty sure the consumer press would jump on. The game received little press in reality, however.

Why? Because the developer in question had led his PR with the fact the game was on Kickstarter  the subjects it dealt with were little more than a sidenote.

Though once the industry's darling, Kickstarter is now more akin to poison for the games press. In 2014, it will dawn on developers that launching a Kickstarter or Indiegogo isn't, in itself, newsworthy.

Indeed, the sheer number of crowdfunding efforts out there mean that the fact a game is on Kickstarter is something developers should almost try to hide. It's certainly not a lead feature.

Will there ever be a time when launching a game on Kickstarter once again generates articles almost automatically? Like F2P, the realisation that crowdfunding is only suitable for a small portion of developers  unique projects or luminaries with a track record  may offer a route back, but in 2014, Kickstarter will finally take a back seat.

Remember microconsoles? We spent the best part of 2013 hyping them up, only for Ouya and GameStick to hit and...well, the articles dried up. Why? Well, not much happened.

There's no doubting that the microconsole has merit, but as far as consumers are concerned, they're not willing to back a horse without a win or two already on its form guide  even for just $99. As a result, it was the PS4 and Xbox One that stole the limelight in 2013, leaving microconsoles somewhat in the shade.

There is hope, however. Though Apple continues to procrastinate, rumours suggest both Google and Amazon are working on microconsoles of their own, and while PS Vita TV hasn't taken Japan by storm, the amount of interest it generated in the west  and the brand boost PlayStation has received as a whole thanks to PS4  suggests there's every chance it could shift a few million units on North American and European shores.

Ouya and GameStick didn't stutter because consumers don't want to play low-priced games on equally low-priced devices. Rather, both devices suffered due to a lack of content  or, more specifically, suitable content.

If 2013 was the year developers quickly realised they can't simply port over their mobile games to microconsoles and expect success, 2014 will be the year when developers that go the extra mile  either developing something original, or tooling up existing releases for TV play appropriately  enjoy success.

But probably not on Ouya or GameStick. Both devices have informed the industry and will have an impact on what Sony, Microsoft, Apple, Google and Amazon do next, but neither has the clout to compete in what's about to become an especially competitive field.

Prediction 4: Mobile will be a three horse race. Or maybe four. Possibly five

For an profession that depends on mobile platforms staying alive and well, there are an awful lot of tech journalists who spend their time predicting their downfall.

Undoubtedly, not every platform that begins 2014 will seen the year out, but there's reason to suggest that the mobile universe can't support life beyond iOS and Android. 2013 may have seen BlackBerry spend much of its time on life support, but it also saw Windows Phone finally gain some momentum and respect after three years largely in the wilderness.

And there's more to come. Both Firefox and Ubuntu have the potential to make waves in developing markets, while Jolla  unlikely to make a major mark globally  has every chance of making a success of its design-led approach, albeit with a niche audience.

The important factor is, as far as device sales go, mobile is still growing. We may think of markets like the US and UK being saturated, but they are just specs of dust on a far bigger playing field.

The wider market  Asia and South America in particular  are waking up, and the platforms that can occupy those spaces have the potential to win big in 2014 and beyond.

Prediction 5: The next big mobile game...will still be on iOS

In the middle of Windows 8's somewhat turbulent opening few months, outgoing Microsoft CEO Steve Ballmer made the bold prediction that the 'next big game would be on Windows'.

In truth, he may prove to be right  since he made that comment, the 'next big games' have been the games that were already around. They've just got bigger.

We can't see beyond iOS, however, and there's an important reason why. The uniformity of Apple's devices mean they are the perfect games machines  fragmentation is minimal, and consumers feel safe parting with their cash.

But iOS's dominance when it comes to gaming doesn't mean that, for mobile as a whole, it has to be the lead platform. Indeed, as things stand, Android is also top dog when it comes to sheer number of users.

The industry has to get to grips with the idea that, for the majority of consumers, games aren't the deciding factor when consumers pick their smartphones  they're an added bonus. Indeed, so ubiquitous are games on mobile these days that (often to their detriment) most consumers pay little attention to what titles are on one platforms.

So, while there's every chance iOS will lose market share across the course of 2014, there's no chance it'll be unseated at the top of the gaming tree.

Android is simply too vast and Windows Phone too unproven for the majority of developers to contemplate flying the nest just yet.