The In-App Purchase Inspector: Gameloft's Despicable Me: Minion Rush goes under the microscope

F2P from the player's perspective 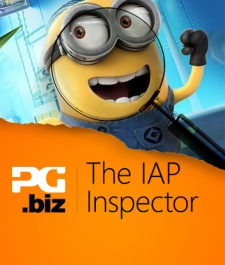 The end goal will be to see whether the game makes a good enough case for us to part with our cash, or whether players are content  or engaged enough  to 'freeload'.

First up, Gameloft's smash-hit from 2013, Despicable Me: Minion Rush.

Right off the bat, there's a lot to like about Despicable Me: Minion Rush. It's bright, it's easy to pick up, and - most importantly - it doesn't gate your playtime with an energy or stamina system.

This made me feel like I was getting a bargain from Gameloft, since I could play Minion Rush for as long as I'd like without spending a dime.

Outside of the draw of the minions, however, it's painfully obvious that Minion Rush is a rather standard endless runner with an interesting rails system to simplify gameplay.

A set amount of these tokens can be earned in-game, but those looking for a large stockpile will need to open up their (digital) wallets.

Overall, Minion Rush presents as being a low-pressure, easy to understand, and - lest we forget - fun little game. But, as a new player to the game, how did I feel about Minion Rush's IAPs?

While Gameloft doesn't gate playtime, it does an admirable job of presenting you with opportunities to spend base and premium currency over the course of a run.

Every dash starts with a chance to buy upgrades or use a 'Minion Launcher' to give you a head start on the course. Similarly, you can revive yourself when you run into an obstacle by spending a handful of the premium currency tokens.

Each of these instances is accompanied by a brief animated sequence - a frantic launch for the former and a rapidly decreasing progress bar for the latter - and it's obvious to see the role that pressure in the presentation.

Going deeper, some locations can only be unlocked by spending Gru Tokens on them - but Minion Rush doesn't let you run on these courses whenever you'd like.

If you'd like to run on a specific course (handy for collecting the daily 'Bapples'), you need to spend five tokens or log enough playtime that the course changes over automatically.

The biggest incentive to spend, however, comes in the form of the minion costumes.

In addition to providing a nice aesthetic change to the base minion look, each costume comes with a special power-ups ranging from score multipliers to auto-revives.

There's even a bit of pressure here, however, as some costumes are only available for a limited time with a clock counting down the time left until they disappear from the store.

On the whole, the consumables and power-up enhancers are about as satisfying as fast food hamburger.

They're a quick and guilty indulgence that feels good at the time, but down the road you'll realise that the pocket change could have been spent on something more worthwhile.

The same holds true for the $1.99/£1.49 the game charges for a pack of Gru Tokens for 40 now-spent revives, which could've been invested in a permanent costume that would offer unique bonuses and a refreshing aesthetic change.

Given that I can play Minion Rush as many times as I'd like without a care toward energy or stamina, I saw little value in the revives and even less in the buffing of power-ups.

The new locations, similarly, felt like a bit of a bad investment since I'd need to be patient or spend five tokens to select a board I already paid for if I wanted to run on it at will.

The costumes, on the other hand, appear a very good deal as they appealed to both my impulsive side - "look at the cute hat", etc - and they add a few worthwhile bonuses to each run.

This category is the one that completely justifies the purchase of the extra locations - El Macho's Lair, The Mall and Minion Beach.

The costumes add some nice aesthetic changes, and the consumables make it possible to amass more currency and bonuses in less time, but the only real update to the stock content comes with the purchase of new locations.

Thankfully, Gameloft included these levels at arelatively low (100 token) purchase price,so it's entirely possible to unlock them without spending a dime if youre willing to grind out a few of the lower-hanging achievement challenges.

With the exception of the consumables that are, by design, ephemeral, there are plenty of persistent IAPs that might tempt me into opening up my wallet for Minion Rush.

I genuinely enjoyed the Despicable Me movies, so I might be willing to part with some cash in exchange for the Bee-do or Firefighter minions.

Considering I can play the rest of the game for free without gating - a point I can't stress enough - the $9.99/£6.99 in exchange for the 1,200 required tokens for these costumes seems like a fair price to pay.

Of course, if I was the type of gamer obsessed with chasing down high scores - a demographic that Gameloft caters to with its Facebook and Game Center challenges - I might see more value in the consumables.

The IAPs in Minion Rush are all low-pressure and high-incentive, rewarding players with both aesthetic and mechanic enhancements.

Additionally, the ungated nature of the gameplay would encourage me to grind away on daily challenges while keeping me engaged as a player.

That said, I wouldn't feel at all tempted to spend on consumables, as I'd be too busy stockpiling my tokens for new locations and costumes.

Gameloft has hit a sweet spot for its gentle implementation of IAPs in this fast and frenetic endless runner. As a new player, I don't think I'd be able to go long without shelling out for a cute new costume or two.

Reply
Matt Diener
That's the catch about qualitative pieces - they'll always be subjective since they're filtered through the individual writer and we all have our individual tastes, biases, and preferences.

The overall goal of this feature is to provide a qualitative look at IAPs. Minion Rush never motivated me to think like a Killer and focus on multiplayer, so I didnÂ’t see much value in the IAPs aimed at performance enhancements.
Posted 7 years, 6 months ago

Reply
Julien Donguy Developer Relations - Mobile Gaming BD at Scoreloop
Good idea (looking at it from a Bartle test perspective). For example, what's missing in my opinion is a bigger emphasis on the multiplayer aspect (competing, collaborating, for the "killers" and "socializers" to increase engagement and, in turn, spending). The challenges in this game are pretty basic and aren't really part of the core loop when many top grossing games like Candy Crush and Clash of Clans use those mechanisms very well to augment the experience.
Posted 7 years, 6 months ago

Reply
Nicholas Lovell
This is a really interesting idea, but it - by its nature - will be impressionistic, and dependent on your own personality type. I know, for example, that I am driven by achievements but not by high score tables (I've got every achievement in FTL on Easy, and am only short about 8 on Normal now /boast)

If we could figure out a way to address your points with a framework (Bartle type? Behavioural psychology, etc), that would be even more interesting.
Posted 7 years, 6 months ago