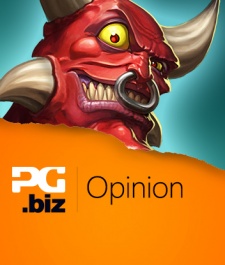 At some point or other last year, I was sat in a room somewhere in the world listening to someone important from a company I can't remember deliver a talk on stage at a conference I can't quite place.

That person, whoever it may have been, was giving a talk on user interface design, and the subject of using design to encourage gamers to give positive reviews arose.

I should point out, I'm not being deliberately vague about the details here  I genuinely can't remember who gave the talk, or where I was when I heard it.

Nevertheless, this particular portion of the presentation has come to the forefront of my mind today.

The developer in question said that, in his game (yes, I remember his gender), the button that took users to the review section of the App Store had an image of five stars on it. Of course, when the user pressed it and was transported to Apple's marketplace, they could score the game as they saw fit.

Nevertheless, he suggested it was his intention to use the button to encourage players into thinking that they had to give a five-star review, all without expressly lying to them.

'I'm terrible at my job'

If I remember correctly, the game in question also rewarded players who reviewed the game with in-app currency.

Again, the wording subtly suggested that only five-star reviews would unlock said currency, although  as the developer pointed out  there's no way of locking off rewards in that way.

Consumers could give the game whatever score they liked. It was the act of reviewing the game that delivered the in-app currency, not the mark they'd given it.

Now, before you assume that I'm terrible at my job (although, you may well be right) and have written this piece without bothering to check my coverage from last year to place just who said what, I should point out that such a search isn't possible.

To the best of my recollection, I didn't write up the talk  or, at least, that part of the talk. A quick Google search would suggest that none of the other journalists in the room did either.

And this is crucial. While the topic of UI design is an interesting one (as today's Full Indie UK column attests) and attempting to encourage users into giving five-star reviews was always likely to raise a few eyebrows, in that moment, I didn't consider it remarkable enough a tactic to write about.

Neither, would it appear, did any of the journalists sat next to me.

A matter of interest

Perhaps this suggests that all games journalists are terrible at their jobs  or, at least, they suffer questionable lapses in judgment when they're cooped up in a hot room with an equally hot laptop sat on their sweaty legs.

However, I'm more inclined to think that the story around said tactic never blew up because it didn't seem particularly interesting or unique. I assumed that strategies such as this - or at least something similar - had been employed before.

Of course, if a developer made such an admission today, half the web would be all over it.

Why? Because it's been revealed that EA's Dungeon Keeper makes use of an especially similar approach when it comes to user reviews on the Google Play version.

As reported by sister site Pocket Gamer, after playing the game for a certain length of time players are invited to review it. They're greeted with this screen.

Tapping the one-to-four stars button invites the user to email EA with any issues they have. Tapping the five-stars button takes them to the Google Play store where, in reality, they give the game whatever score they like.

Nevertheless, the intention would appear to be to trick players into thinking they can only give Dungeon Keeper a top rating.

Predictably, portions of the games press have been quick to jump all over this story, and it's not hard to grasp why: Dungeon Keeper has already been in the headlines  many objecting to EA taking an old IP with a loyal fanbase and turning it into a free-to-play release.

As such, any story suggesting the game is indulging in foul play is going to generate page views aplenty.

What's more, looking at the long-term agenda of the games press, any anti-EA story is likely to deliver a fair few hits too, with the publisher serving as the go-to company for anyone looking for an example of the 'darker' side of the games industry.

On top of all this, we also have the fact that this 'scandal' revolves around a free-to-play game  a model which, as we all know, was created by the Devil to punish anyone who loves games.

In the eyes of much of the games media and its readership, free-to-play remains a prime example of pure evil, and any story that suggests those behind F2P games are just as sinister is going to be an instant winner.

Of course, there is actually a story here. A genuine issue or two to investigate.

Should Apple and Google look to clamp down on any games that, expressly or not, try to influence user reviews? Do user reviews actually matter in the first place?

Who reads them, and do they offer any value to consumers at all? Or do many, like me, avoid them altogether, fearing any praise will have been penned by a PR company?

Even beyond that, what do EA's Dungeon Keeper tactics say of game discovery in 2014?

If a force the size of EA is having to coax users into posting positive accounts to try and generate some virality for the game, then what hope do the smaller outfits have?

There's a story somewhere in amongst all the rage and the rioting on social media, but it remains to be seen whether the games press will look into it.

From Doritosgate to the 'Xbone' saga, a share of the games press consistently opts for the lowest common denominator on such issues, preferring to play to the existing opinions of readers rather inform them.

Some writers and some websites will always offer credible content that looks beyond the obvious to the real issues, offering articles of real significance. For the rest, however, it seems unlikely that this 'knock it out and bash it up' culture will shift any time soon.

Reply
Keith Andrew
Barry - I'm not saying that the press don't have every right to call out such practices. My main point, however, is that the current furore isn't out to do that - it's following the narrative that EA is evil, F2P is evil and Dungeon Keeper is evil.

I'm trying to suggest that there were journos aplenty likely in the room when I listened to the talk in question, and none of us jumped on this story. I like to think I have a pretty good sense for what should be followed up and what shouldn't, yet no-one in the room chased down that dev.

Yet this little trick comes along just as the press has decided it's going for Dungeon Keeper, and this story fits the bill. As I say, I think there are bigger issues behind what's happened here than just Dungeon Keeper, but the games press seems to have a nasty habit of never following things up, never looking past the obvious.
Posted 7 years, 3 months ago

Reply
Barry Meade
Keith, firstly because a group of journalists at a conference didn't shriek at the mention of a tactic, does not quite mean that that tactic will go down well in the real world with the paying users it's attempting to fool. Secondly, the example you gave above is not the same, nor as bad, as Dungeon Keepers attempt to control their user rating. Thirdly, is it not in all our interests to attempt to keep the industry's nose clean where possible? That includes anti-consumer dick moves that are technically legal such as these mentioned above.

I'm getting confused at how reviewing sites will give f2p games a pass on the most tasteless, grasping, egregious anti-player anti-gameplay anti-fairplay travesties, where any paid or console game designed with a breath of that cynicism would get stretched on the rack. A $60 big IP game that only lasted two hours will get shat on as shocking exploitation, but having to pay $70 to dig out 50 blocks in a block-digging game gets a pass because hey, F2p.

As a gamer, my standards of what a good game is and what ought be celebrated in the medium remain the same whether I'm playing Zelda or GTA or Dungeon Keeper. Just don't get the defence some are giving this serially piss-taking game at all.
Posted 7 years, 3 months ago