'Everybody bumps into the first pipe': How Flappy Bird and Ikaruga turn scoreboards into an asset 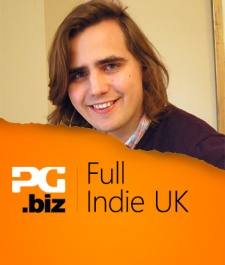 No-one cares about high scores in your game.

Okay, I'm exaggerating a little. The truth is, no-one cares about scores immediately. That goes for social features too.

Simply adding in a leaderboard is not enough to get players competing over your game, even with the richest and deepest score systems. Before players will pay any attention to them, that score needs to have a real and personal meaning.

Getting to this sense of meaning can range from the simplest of hooks to a long-term relationship-building exercise with the player. And it's not just about scores.

Score systems are something I have a particular love for; arcade-style score chasing is one of my go-to genres as both player and designer.

My first iPhone release, 2011's Greedy Bankers, is a score-driven puzzle game, and I have learnt a lot by reflecting on its mechanics.

The player drags coloured gems around the screen into like-coloured squares and rectangles, which can be cashed in to help reach your target score.

Gems can also be used to destroy rubble and create space for bigger gems, so the complexity comes from deciding to sacrifice a gem or try to grow it larger for more points.

I was pleased with the emergent complexity these simple rules created, as well as other small details which smart players could exploit to optimise their performance.

But on reflection I notice an element was missing: for many players the score was just an arbitrary number. Players had no feel for what score they should get, or what score they needed to aim for, yet beating that number seemed to be the only reason to play again.

The lesson? Depth and complexity on their own are not enough to make players want to explore a system.

Ikaruga and the long game

When talking about score-chasers that I idolise as both designer and player, Treasure's scrolling shooter Ikaruga stands up at the top.

Each enemy is assigned a colour: black or white. By destroying three like-coloured enemies in a row, a player is awarded a chain, along with bonus points. For each successive chain the player gets double the bonus points, until they make a mistake and the chain count drops to zero.

Getting a great score involves destroying as many enemies as possible in big unbroken chains. It's a game of picking apart complex patterns of enemies.

What makes it work is that you don't actually go into the game trying to explore this mechanic. Your first objective is simply to get to the end of the game. As you learn and begin to move through the levels you'll pick up enough continues to beat it, and then have a new objective: beat the game without continues.

Then, and only then, will you start thinking about scores, because extra lives are given out based on points earned. The better you score the longer you'll survive.

That's when you start trying to get the longest possible chains, and the delight of exploring the system it for its own sake emerges.

Ikaruga doesn't just put complex systems of numbers into the game and expect them to be hypnotic. It gives you a series of relatable goals to draw you into the game, and presents you with a score system as a tool for achieving the harder ones.

Not all games need a long journey of relationship-building to get players to care about their scores. Flappy Bird stands out as a recent example that gets players to care in the first ten seconds.

Everyone bumps into the first pipe.

Bumping into that pipe is all the motivation you need. You know exactly why you failed. You can't possibly be too clumsy to score one measly point, can you? It has personal value because it gives you something to prove.

The same is true of Super Hexagon. Lining up a triangle with a gap in a hexagon shouldn't be difficult for a grown adult such as yourself.

But there's another magic tool in the belts of both these games: the score has direct and relatable real-life meaning.

If I tell you I flew through 11 pipes, you know exactly what that means. If you've played Flappy Bird at least once you can probably recreate that exact play session in your head right now. Similarly if I tell you I survived 26.4 seconds in the Hexagoner stage.

I can tell that score to myself and know exactly what it means: exactly what I did better than my last run, and exactly how much better I feel I should have done.

From scores to social

Scores aren't the only features that rely on relationships and meaning. Everyplay's Oscar Clark - in a recent article on GamesBrief, Six Degrees of Socialisation - tells a familiar story. This time for community-building.

You can't simply expect a player to become an active fan or evangelist for your game overnight. For that to happen they need to go through multiple stages of relationship-building. You need to nurture them as a new player before they'll be comfortable competing or collaborating with others.

If I were to extrapolate this argument I'd say the same holds true for any social feature: Liking your game on Facebook, sharing a cool new avatar, or streaming on Twitch.

Before anything else you need to connect to them on an emotional level.

Alistair Aitcheson is a one-man studio working in Wiltshire, UK. He is the developer of the Greedy Bankers series of iOS games and a founding member of indie collective Full Indie UK.