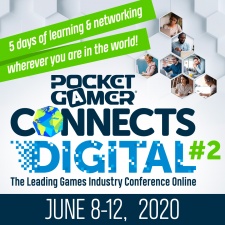 With Pocket Gamer Connects Digital #2only a matter of days away, attendees are already sure to be sorting out their schedules so they can attend the right sessions for them.

And we have a whole heap of them - I thought we had a lot at the first of our digital events, but we've already managed to cram a huge amount of extra content in and we're only on our second go around.

So, which ones should you attend? Obviously that largely depends on your professional interests, but as editor of PocketGamer.biz it falls on me to pick out a handful that I consider unmissable, and you'll for sure catch me in the audience of.

To remain fair, I've picked out one session from each of the tracks, and tried to include a mix of sessions from earlier and later in the day, so everyone has a chance to check them out. And if you can't make it, don't worry! There's so many more great sessions to check out in their place - just check the full schedule.

If these aren't in your planners, get them jotted down right this second. And if you've not got your ticket to PG Connects Digital #2, then there's still time! Grab yours right here, quickly!

What Does Success Look Like In UA? - The Growth Track - Monday 8th

The Growth Track is the home of many a discussion on user acquisition on techniques for growing your game, so if you want to get a handle on the whole thing in one session, this is the place to be.

PocketGamer.biz's own Kayleigh Partleton will be making her conference debut as the moderator of this panel, which features representatives from Next Games, REMERGE, AppsFlyer, and more discussing how they view success.

It's a well-known fact that publishing games in the East is vastly different to publishing in the West, but games from all corners of the world can have success no matter where they end up being released.

So join Tencent senior consultant Aras Senyuz as he explores the reasons why Eastern games succeed in the West, something one of the world's biggest mobile publishers probably knows a thing or two about.

Having chatted with A Thinking Ape's Tayber Voyer during the last PGBiz RoundTable, I'm very interested to hear more about the company's attitudes towards monetisation and particularly its exploration into trading.

This talk promises to dig into all that and more, with the notion of black markets particularly raising an eyebrow. Under the table deals in Party In My Dorm? This I need to see...

It's surely a known fact by now that I enjoy a good bit of intersection between narrative and gameplay, so you'll be sure to catch me in the crowd at this talk.

Valiant Game Studio founder and creative director Anna Jenelius with be talking about gameplay and narrative, probably on a budget too, which is even better if you're a starving artist writer like I pretend to be sometimes.

Critical Force has been working on its multiplayer FPS Critical Ops for about as long as I've been in the industry, and I'm pretty excited to see where the game is heading next.

Critical Force CEO Veli-Pekka Piirainen will be talking about just that, with a particular focus on the world of mobile esports, a pretty major untapped market that probably just needs the right game to really make it sing.

Sensing a theme here yet? I'm very, very excited to find out about the recent return of interactive fiction, and some of the folks on this panel are definitely worth listening to on the matter.

Kate Edwards is obviously a huge name for this panel, but Charisma.ai's Guy Gadney, 10th Muse's Karoliina Korppoo, and the rest of the panel are sure to be just as insightful, interesting, and validating of my chosen career path as a writer who dabbles in interactive fiction.

Lighting feels like something of a dark art, ironically, so it's nice that someone is coming to PGC Digital #2 to shed some, uh, light on the matter.

THQ Nordic art director Daniel Candil will be discussing the fundamentals of making sure your game is well-lit, or at least lit correctly for the kind of vibe you're going for I suppose.

Shouts out to Oscar Clark for a) having a great hat, b) being a great speaker, and c) contributing a title that instantly grabbed my eye and made me think, hey, I want to see that talk.

If you've not seen an Oscar Clark talk before, prepare yourself to be thoroughly educated in the word of live ops, while also enjoying the heck out of yourself. Definitely one you shouldn't miss.

It's a stressful time for all of us right now, so it'd be nice to know how team leaders can look after their staff and avoid burning them out while still creating wonderful new things.

Luckily, Saga Performance founder Satu Ahlman has a talk all about that, which is sure to give you a better idea of how to make your business run without running everyone into the ground.

I couldn't resist a quick bit of self-promotion. Join me, Ric Cowley, editor of PocketGamer.biz, as I lead a RoundTable discussion about the best practices for recruitment with some of the finest minds in the recruitment biz.

Or, if you can't make that, join me again on Friday evening for another recruitment-focused RoundTable. Take your pick, really. Both of them are going to be great. I've made sure of it.