"I think we will see community and social features take on a much greater importance in game design, especially for mobile games" 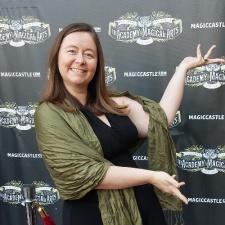 Before joining Xbox in 2019 she spent 16 years as a game developer working on large scale, online games with teams at ArenaNet, Nexon, and Disney.

Throughout her career, Crystin has focused on game design and direction, monetization strategy, and LiveOps while also being active in the game developer community as a frequent speaker and writer, she is also the co-host of the podcast The Art of LiveOps.

Crystin Cox has spent the last 17 years making games, specifically large scale, live games. She has focused on game design and direction, monetization strategy, and LiveOps while also being active in the game developer community as a frequent speaker and writer, especially about ethics in monetization.

She loves making player-centric games andhery belief in building long term engagement through live operations has led her to work with teams at ArenaNet, Nexon, Disney, and now the Publishing team at Xbox Game Studios as Director of Live Operations where she helps multiple development teams improve the design and quality of LiveOps for their games.

Cox was part of Pocket Gamer Connects Digital #2, giving a talk called "The LiveOps Checklist" as well as participating in a panel for the LiveOps track titled "Live Ops is not a Sprint! - How do You Plan a Recurring Series of Activities Indefinitely?".

Before PGC Digital #2, we spoke to Cox about how the games industry has changed since she joined, and what trends she expects to see over the next 12 months in the industry.

PocketGamer.biz: Tell us a bit about Xbox Game Studios.

Crystin Cox: Xbox Game Studios is a division of Microsoft. Our 15 game development studios focus on delivering great games for everyone, wherever they play—on console, PC, or mobile devices.

We’re responsible for developing and publishing some of the biggest game franchises in history: Age of Empires, Forza, Gears of War, Halo, Minecraft, Microsoft Solitaire, Microsoft Flight Simulator, State of Decay, and many more. We believe that play is the thing that unites everyone, because when everyone plays, we all win.

I work with a variety of game development teams on strategy, process, and design intended to help their games succeed after launch.

I love making games. I value the truly collaborative nature of game development, the fast-paced nature of a constantly evolving industry, and the creative ambitions of such a young medium.

I think we will see community and social features take on a much greater importance in game design, especially for mobile games looking to survive in a world of increasing acquisition costs. Organic acquisition and long term retention potential will become important considerations during a games production.

Wow, in so many ways.

Two big things that come to mind... First, it is now so easy to launch a game. When I started you needed a retail distribution deal or the ability to purchase and house your own servers around the world to launch a game. Now you can distribute your game so easily through digital distribution platforms, this has created a much more diverse set of games and game developers.

Second, games have become much more mainstream. A lot of this is the combination of ubiquitous internet access and the creation of smart phones giving rise to mobile gaming, these two things have made games so much more accessible and global.

Just getting to see and hear from so many different developers from across the industry. It's easy to lose sight of the greater community of game developers when you are heads down in your work most of the year.