How can iOS widgets help games improve their performance on mobile? 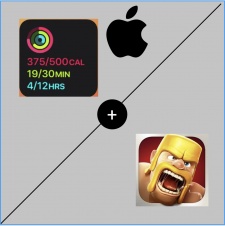 With the new release of widgets on iOS 14, we as game developers need to analyse the potential of them. We now have something that both platforms have, and can be used to maximise game analytics results as Push Notifications are doing right now.

Widgets are presented as a way to elevate key content from an app display, it’s optimal use is to be a window for the information of an app to be shown in the widget without opening the app. A brilliant example is the weather widget, which is able to show the key information of how the day or the week is going to be in general terms, if the user is more interested in certain moments of the day or a certain day of the week then they will need to open the app, but if not the key information is in the widget.

These widgets are also editable, and stackable which makes it very interesting to use as a customised way to maximise retention and improve the player experience of players through widget usage.

The player will be able to select which information he needs to display within a set of displays. We are going to make a simple approach for a game that we all know, Clash of Clans. The widget that this game could have could contain this set of information:

The main problem that widgets have is the reticence from users to add it to their screen as they need at least four app icon spots to fit in the screen, that’s why only the most useful and meaningful widgets remain on users’ screen. So let’s see how developers are supposed to design those widgets.

In a poll made to Android users by Nextpit, a tech & community website blog, they wanted to know if their readers were still using widgets and these are the answers.

Only 15 per cent of respondents said no, and their justification was widget usability. As 85 per cent of the people surveyed still use widgets, we need to still believe in their potential, and knowing that just a few widgets will be added by each user.

That’s why we can’t pretend to incorporate a widget to each game, this game needs to be a game where one of the primary necessities for the user to open their phone. Nobody will add a widget to their phone if the game isn’t entertaining enough and the information shown on the widget is relevant for them.

In the case that a player is actively playing several games, the player will be able to stack up to 10 iOS widgets so these widgets don’t require to be on different screens.

To sum up, not all games should incorporate a widget, because most of them can perform the same way with push notifications only, so there’s no need to add more expenses to the production costs for something that most players won’t use, depending on the type of game you are making.

In conclusion, game widgets should be used by players very attached to the game, that need to optimise their time. Imagine being able to see in your widget the information immediately, instead of waiting 40 seconds while the game was loading? That’s what players want from widgets, a way to optimise their time, and standardising widgets usage is the solution for this now that we have widgets on both iOS and Android platforms.

If you want innovative art solutions that are true to your vision, Starloop Studios knows how to highlight your game through their experience in game art solutions services. We consist of professionals that cover all the stages of art production from creative concept and sketching to the development of outstanding animated 3D characters, texturing and rigging, making environments, UI and UX and 2D elements. We deliver 2D and 3D game art services to our clients as a part of full-cycle development and as separately to the project in progress.