Charting our path to the City of Amber 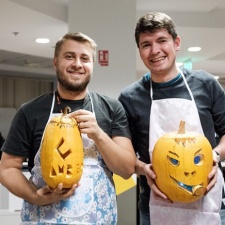 Founded in 2013 with three employees in Bucharest, Romania, Amber is a game development and studio services company.

About two years ago, we at Amber - writes CEO Mihai Pohontu - realized that as our company was expanding to multiple territories we would need a strong, unified company-wide culture to ensure that our various studios - and the employees within - were on the same page.

At the time we were but a humble game development studio based in Bucharest, Romania, but we had plans for expansion, and we knew that a centralized company culture would be instrumental to that growth.

Inspired by the story of Pixar (as relayed by Ed Catmull in his book Creativity, Inc.), our first step was to meet as a team every two weeks in a sort of informal book club.

We knew a centralized company culture would be instrumental to growth.

We compiled a list of management books we believe represented the most advanced thinking on the topic of company culture, rooted in the latest anthropological and psychological research.

We read the works of Nassim Taleb, Patrick Lencioni, John Doerr, Eric Ries, and dove into the principles of Lean management theory as deployed at Toyota.

We knew the entire field was undergoing a broad transition from the classical tropes of management theory that focused on rewarding individual performance and towards a more humanist interpretation that emphasized working as a collective.

As we absorbed this wide array of concepts, we sought to adapt them to the games space, and, more particularly, to our company.

And here’s where our troubles began. You don’t normally hear about this in culture change literature, but the process of aligning a leadership team around a set of cultural values is fraught with peril.

A well-functioning executive team, with a good measure of operational accomplishment as a group, can effectively come apart at the seams once it seeks to align everyone’s deeper motivations for pursuing their work.

The process of aligning a leadership team around a set of cultural values is fraught with peril.

After all, everyone has different experiences that shape their worldview and thus, we all have different motivations for doing our jobs. So getting everyone on the same page is easier said than done.

Our book club meetings became a minefield of competing ideas, as we proceeded to challenge each other on our deeply held beliefs over the course of six months.

We were desperately trying to come to an agreement, but found it impossible. Eventually two broad groups of opinions formed.

One group believed that our top priority should be to keep our teams happy, and that their well-being would inspire higher quality work.

The other group believed that focusing primarily on the product first and foremost would bring everyone together, thus forging strong and healthy teams.

While we were able to compromise on smaller issues like compensation and evaluations, these core philosophies seemed so inconsolable that two valued members of our exec team decided to leave the company altogether.

Needless to say, it didn’t seem like things were going well.

Call in the professionals

This experience had left us shaken. After all, the point of these discussions was to bring people together and unify the team, not splinter them off to the point that some would stray from the pack.

You can’t please everyone, so some friction is a natural part of the process.

Despite this anxiety, we were still resolved to see it through, and having witnessed our difficulty at negotiating our own positions, we sought professional help from management consultants with experience in culture change and hired a local firm called Wanted Transformation.

In hindsight, we would’ve spared ourselves some heartache if we’d hired this external help earlier, but I don’t think we could’ve prevented the schism that happened.

Our consultants confirmed that such sacrifices are inevitable in the effort to build a cohesive, unified vision. It’s rarely talked about, but all leaders who seek to create a new, unified company culture should expect traumatic strife from those with a different vision.

If you want to pursue this process to its full extent, it will prompt a deep reexamining of personal values, and not everyone is going to feel that the new vision represents them.

To put it simply: you can’t please everyone, so some friction is a natural part of the process.

Eventually though, we were able to craft a path forward.

Armed with this knowledge, we proceeded to craft our core philosophy, which started with understanding the role we wanted to play in the world and our identity as a company.

We decreed that Amber is a collective of artisans delivering positive impact by “evolving the science and art of play”.

This poetic expression translates to a spirit of experimentation that permeates the entire span of our organization.

Effectively, this means we strive to create an environment where we put play and curiosity first, believing that any failures along the way are opportunities to learn and grow.

We defined our vision, mission, values and operational principles, then used these philosophical elements to directly feed into our strategy.

This means we strive to create an environment where we put play and curiosity first, believing that any failures along the way are opportunities to learn and grow.

From there, we were able to craft annual objectives to support our new model. Coming up with these goals was surprisingly fun, as we knew we were catering to a common view.

Whereas the previous year had been a painful slog of focusing wholly on the product, this new company culture of experimentation both raised morale and accelerated our productivity to a shocking degree. We could see the synergies of a tight-knit team, united around a shared purpose.

The sparks of inspiration were flying, and we couldn’t wait to share this body of work with the larger team!

Clearly concocting a unified company culture was a success, but getting there wasn’t easy.

The survey is considered a gold standard for providing an accurate perspective of a company’s current culture.

This survey offers a comprehensive view of how the culture is perceived in all corners of the organization, from those in leadership to the most recent hires. The survey produced results which more or less matched our expectations: we were akin to an average company, with some good traits and some that sorely needed improvement.

There was clearly work to be done, but at least now we knew where to begin. So we packaged the results and communicated them to our staff via a town hall and written communications, emphasizing our need for embarking on a culture change process.

The following step was to assemble a meeting with the bulk of Amber’s management teams to start interpreting the results and discussing concrete actions to address our deficiencies.

In effect we were replicating the leadership conversations, only this time in the management layer with our consultants from Wanted Transformation steering the conversations. Meanwhile, we started sharing our core philosophy with the broader team, starting with this management group and gradually extending to all staff, culminating with a final town hall meeting.

We assembled a website called “City of Amber”, offering a glimpse at the ideal state of the agency we were building. It contained many articles around company culture, including a strategy white paper, and case studies on how we intended to apply our values to resolve practical business problems.

Once our core philosophy was disseminated, we organized a summit where we trained a large number of culture facilitators whose mission was to organize regular culture meetings with up to 10 members of Amber staff.

Our journey is far from complete, but we are already seeing increased motivation and participation from our staff.

We called these facilitators “Culture Envoys”, and their groups were randomized to contain staff from Amber’s various teams all across the globe. Besides understanding our core philosophy, strategy and objectives, the role of these meetings was to involve all of Amber in drafting and pursuing actions meant to improve our culture.

These meetings are still ongoing, as our journey is far from complete, but we are already seeing increased motivation and participation from our staff.

The fact that this occurred during a pandemic, which heightens the cultural fraying of complex groups, is even more extraordinary. In practical terms, we were seeing the benefits of this culture change process expressed in the actual performance of our teams.

By unifying our various studios across the globe, we were able to generate over 50% revenue increase annually and opened two new studios in the past year (in Montreal, Canada and Guadalajara, Mexico).

The fact the culture process is pursued globally allows us to easily work across many countries, because we share a lingua franca, a common language that comprises the same operational principles and clear, shared objectives.

This is a common culture that allows and respects local variations. We grow together, each of us hearing each other out to create a unified purpose.

This bond of a strong culture helps us to identify partners who fit our philosophy around employee-lead experimentation. This is valid for studios we merge with (as we’ve done in the past), as well as staff we onboard.

Most importantly, we believe our culture acts as a powerful factor for staff engagement and retention, which is particularly important in such a competitive industry where talent is sought from competitors all around the world.

We recognize that maintaining a cohesive company culture that we can continue to rally behind is a never-ending process - and indeed one that becomes more challenging as we continue to grow.

Still, we believe that the company culture we’ve cultivated is the glue that keeps Amber’s far-flung offices together and will remain key in cultivating a strong, happy, productive work environment across all of our studios.

Find out more about Amber's journey via its website.