How innovation and iteration has transformed Survivor.io

AppQuantum break down the successes of the game. 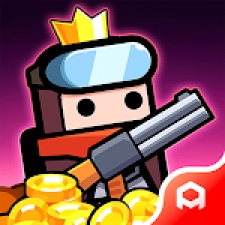 Not so long ago, our attention was caught by a rapidly growing project named Survivor.io — a mobile roguelike-action game from HABBY. With nearly $9,000,000 worth of in-game purchases and more than 8,000,000 downloads by the end of August, it was hard to miss.

What's even more remarkable though is that all of this came from a massive growth surge which took place in less than a month.

Using their own experience and data from SensorTower, our game designers, Oleg Alyautdinov and Oleg Lomakov, decided to find out the secret of the game’s success and look toward its future.

What’s this game about?

Suvivor.io (or Fire Now as it is called in some countries) is a free-to-play 2D-roguelike. For 15 minutes, players fight against tons of monsters and upgrade their skills while surviving on the map.

There is a timer positioned at the top of the screen that helps players keep track of new enemies, as well as of mini- and regular bosses.

By smashing crates on the map, players can get a soft currency or special items that will help them during the following playthrough e.g. a piece of meat that heals you, a bomb that kills all enemies in visual range, or a magnet that attracts XP from slain enemies.

During one run, the player gets specific skills which he can develop in various ways. By collecting XP and reaching new levels, the player unlocks new abilities or upgrades existing ones. By looting crates obtained from defeated bosses, existing abilities get an upgrade (in addition to the in-game currency — coins). There is also a slight chance of receiving not one but three or five modifications.

After the character's death, players are sent back to the main menu, where they can upgrade their characters and equipment using previously earned soft currency. There they can also select challenges, buy stuff in the shop, collect passive income, etc.

Survivor.io. is a game about your unshakable power.

The character's combat potential increases rapidly with every new level he reaches. At some point, you can see nothing on the screen besides damage you deal to your enemies, while the monster kill counter just won't stop spinning.

Although, at the same time, the action doesn't seem too cruel or brutal. It is actually rather vivid and even spectacular: the character throws bricks and soccer balls at enemies, and zombies in business suits throw mobile phones in return.

If the gameplay of Survivor.io rings a bell with you, that is probably because it copies another sensation: PC-indie-hit — Vampire Survivors, from the studio Poncle.

This may be another reason why Survivor.io became so much-talked-of. Fans have been dying to get the game's official release on mobile devices, but it hadn’t happened at the time of Survivor.io's launch.

Vampire Survivors was released in December 2021 (which is relatively recent) and is still in early access. Simple yet addictive gameplay, short sessions, intuitive controls and pleasant graphics attracted many PC gamers and helped the game receive nearly 100,000 positive reviews on Steam. It is worth mentioning that at the time of release, the game cost about $3, and the price was changed only during festive events.

Here the player also fights with many monsters, gets level-ups, upgrades abilities and tries to survive for a certain period of time (unlike Survivor.io, here you need to last 30 minutes to spawn the final boss). However, the game is still different from its mobile “brother”. Here one can choose their character and upgrade their basic skills.

Each run starts with a character on the first level who gets XP by killing enemies and getting stronger. Typical for a Roguelike game.

There is a widespread opinion that the mobile game market is where studios steal popular game concepts and create their own clones. The case of Vampire Survivors is also ironic because it was inspired by another popular project by HABBY — Archero. The developers from Poncle even pointed this out on their website.

The way to the casual audience

It usually takes more than just porting the game from "big" systems to attract a broader audience on the mobile game market. At least the developers should adjust the mechanics and ensure that the gameplay on smartphones is relatively player-friendly. The most challenging part is to set up monetisation and start making profits.

Vampire Survivors is a Pay-to-Play game aimed at replayability, like any other roguelike game. A player should feel that his money is not wasted on a game that can be beaten in just half an hour. Thus, by making the game have an expansive rogue-lite progressions loop, the developer can avoid receiving bad reviews and refunds (even if a game costs only $3).

Therefore, the game has many retentive factors and a wide variety of gameplay elements:

While Survivor.io is a Free-to-Play game aimed at a wider audience, placing special emphasis on player retention. If a player can form a habit of loading the game every day, there will be higher chances of him making his first in-game purchase. Consequently, there are many ways to stimulate players.

For instance, the game has:

We’ve also noticed that the core gameplay was smoothed out and more “focused,” making it more understandable for the casual audience:

HABBY studio is well-known for their project Archero, which can rightly be called one of the most successful roguelikes on the mobile market.

The publishing company has many projects under its wing, but the most popular are those that include a roguelike core in some way. Working on Archero, they had developed their own gameplay “recipe”, which they later implemented in Survivor.io and another recently released but already successful Kinja Run.

Some of such features are:

According to the publisher's experience, these components can be applied to a dungeon-clearing action (Archero), as well as a mass-kill roguelike (Survivor.io), and even to a runner (Kinja Run).

The situation in the market

It is hard to find the exact release date of a game. In this case the publisher has several accounts, one specifically aimed at the Chinese audience. The iOS version has existed since 2020, and the Android version appeared only at the end of July 2022. On August 1, apparently, both versions began user acquisition actively, and a week later, their earnings started multiplying daily. After that, the stream of downloads and revenue hit the game like an avalanche.

Why was the game’s release date first announced back in 2020? To answer this question we’ve decided to go through their advertising creatives. Using one of their accounts, the developer was most likely testing the audience's interest in roguelike using fake shots (a video with the gameplay of a non-existent game). In their creative archive, we’ve found two-year-old gameplay videos that look nothing like the current project.

There are quite a number of various roguelike games on the mobile market, half of which make good money. Although in terms of gameplay, they may seem quite different, the foundation stone remains the same: In each run, the player starts from the very beginning with zero progress. This graph also shows ports from a PC (FTL or Darkest Dungeon), but their results are not even close to those of Archero.

Talking about the projects that are now gaining popularity Super Wizard and Soul Knight really stand out. The former's revenue has grown from $1,000 to about $400,000 since this January. Since its release back in 2017, Soul Knight has been developing unevenly.

We may draw several main conclusions based on the case of Survivor.io.

Firstly, mechanics in a mobile action game don’t necessarily need to be complex. It is a question of finding a balance between simplicity, challenge and enjoyment. If you choose to borrow the core gameplay from a PC, don’t forget to adapt it to mobile devices.

Secondly, we will most probably see Survivor.io on the charts again, as the game has already picked up a good pace and is gaining popularity not only among the audience that fell in love with Vampire Survivors but also among newbies.

New features may appear in the game in the future, advancing the gameplay and maintaining users’ interest.

How we see it:

Given the popularity of the roguelike genre, other projects inspired by both PC and mobile hits will appear in the future.

AppQuantum will continue monitoring the market and telling you about new worthy mobile projects.