Home to 21 million high-spending mobile gamers, Saudi Arabia is growing as a centre for investment and publishing 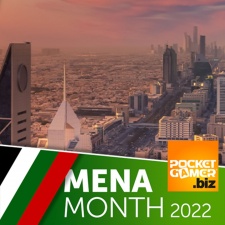 Saudi Arabia is known for oil, affluence, and, increasingly, as a digital hub for technology growth. The country appears to be eagerly embracing its high profile among technology watchers, particularly in the mobile and gaming spaces.

However, in the mobile gaming industry, there is one Saudi data point that gets everyone’s attention: US$270.00, the average revenue per paying user (ARPPU) for mobile gaming. For context, China, considered rich territory for mobile gaming, has an ARPPU of only US$32.00. Saudi affluence significantly tips the scales for certain mobile game metrics in MENA, driving explosive growth for products that catch on with gamers.

It’s no surprise then that Saudi Arabia, the largest country in the MENA region, is an extremely attractive market for mobile gaming companies. The pandemic only intensified existing growth trends: Saudi Arabia, along with Kuwait and Israel, saw the largest gains year over year in mobile game consumer spend in 2021, according to Newzoo.

A recent survey of 1,195 mobile gamers who are active internet users (aged 10-50) and living in residential, developed areas in Saudi Arabia revealed other interesting tidbits:

Overall, 89% of the Saudi Arabian population are gamers, according to Mohammed Saud Al-Tamimi, governor of Saudi Arabia’s Communications and Information Technology Commission.

The trends in gaming in Saudi Arabia have not escaped the attention of startup companies and investors. As Arab News reported, Saudi Crown Prince Mohammed bin Salman has discussed his ambition to see 30 competitive games developed by in-country firms by 2030 – all part of the country’s national gaming and esports strategy.

You can see the official National Gaming and Esports Strategy mission at the official website - it represents "a comprehensive investment to develop the entire gaming and esports value chain" and is "a strategy that fosters new career and business opportunities and will make Saudi Arabia the center of the game by 2030."

This month, mobile game developer, publisher and investor Sandsoft announced the opening of a Riyadh studio, creating over 80 career opportunities and marking the first step in Sandsoft's investment into the MENA ecosystem. And in September 2022, Savvy Games Group, owned by the sovereign wealth fund PIF, announced that it plans to invest 142 billion riyals (US$37.8 billion) in initiatives to make the kingdom a global hub for gaming. Just last week, it was revealed that the company is planning to acquire an as-yet-unnamed games publisher for $13 billion.

Studios thriving in the region

A growing population of gamers plus government support for the industry have made Saudi Arabia a booming hub for digital gaming. One company embracing the nation as its home is Spoilz, a mobile game developer based in Riyadh with a growing user base. Spoilz is busy releasing games throught 2022, and plans a portfolio of 12 games by the end of the year.

Musab Almalki, the Spoilz CEO, sees Spoilz’s chosen home as the perfect place for his company. “There are creative minds and tech-savvy individuals who are eager to learn and want to build something revolutionary that can change the world,” he says. “The digital infrastructure is one of the world’s best, and Saudi Arabia has a strategic location with easy access to most of the world.”

We also spoke with local studio Wolf and Others. Beginning as a student project and later growing into a small team with big dreams of designing games for multiple platforms and audiences, Wolf and Others is a gaming studio in the Kingdom of Saudi Arabia (KSA). The company’s first game release, Nightmares To Be, reached over 50,000 downloads in its first few hours of release. According to Sans Wolf, founder and CEO, the business is just getting started.

“We have numerous games in our arsenal already reaching 10,000 downloads and feel we’re at the very beginning of our growth,” Wolf says.

One reason for Wolf’s optimism?

“Saudi Arabia has the biggest active player base in the region, and the audience is open to trying new things,” he says. “But it’s a sophisticated audience, so it’s better not to overhype things, but instead make sure your product is clean of glitches and well thought out.”

Visit the region in person to find out more

You can meet many companies like this at our own Leaders Summit, taking place on 31 November and 1 December. The summit is a chance to discover the region in the company of CEOs and decision-makers. Meet and connect with 150+ senior leaders, and look ahead to the technologies and business models that will shape both this region and the wider global games industry in the decades to come.

Enjoy the beautiful and unique location of Riyadh, with evening dinner activities included as well as a desert experience with buggies, camels, falcons, food and entertainment. The limited VIP ticket option also includes access to a luxury VIP sky box at the Soundstorm music festival!

Riyadh itself is a beautiful capital city: here are six things you can see and enjoy there.

David Fernández, CEO of Sandsoft, on the importance of Blockchain to the future of games