Players may be more inclined to make in-game purchases in idle games based on existing IPs. 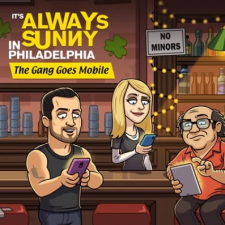 For a brief period in 2019, I was obsessed with the mobile game It’s Always Sunny in Philadelphia: The Gang Goes Mobile. Based on the hit FX sitcom, this idle clicker tasks the player with helping the characters succeed in various schemes lifted from the series.

I’m a big fan of the series, but after a few weeks I lost interest in the game. However, during that time it did at least succeed in piquing my interest in one intriguing respect. And that's the question as to why the idle genre seems to be the go-to for any series hoping to break into mobile gaming?

Archer, The Office, Trailer Park Boys, and Star Trek: Lower Decks are just some of the established series that have seen idle adaptations in recent years.

So what makes idle gaminh so uniquely suited for adaptations?

A big factor could be the simplicity of the gameplay. It’s relatively simple to take a group of established characters or a well-known setting and transplant them into an idle game. This is especially the case for television series which use a more episodic format, which is itself ideally suited for the genre. The Gang Goes Mobile utilises this exact conceit, with each level (called episodes) ending with the money earned being lost in a dumpster fire, forcing the player to restart.

The idle game is also ideally suited for telling a story with relatively simple formats. A few cut scenes made up of lines of text and simple animations can help drive success by imposing an overarching narrative, whether to the level or to the game as a whole, offering a sense of progress outside of earnings and upgraded facilities. It’s a genre ideally suited for mobile gaming, or situations where a player will pick up their phone for a few minutes while on a lunch break or a commute, and by utilising an established franchise a developer can easily attract an established audience of fans.

But how does this established fanbase translate to revenue?

There’s a decent argument to be made that leveraging positive feelings to the source material translates to earning potential.

Trailer Park Boys: Greasy Money, Archer: Danger Phone, Star Trek Lower Decks Mobile and RuPaul’s Drag Race Superstar all charted within the top 100 idle clickers of 2022 according to Appmagic data, with RuPaul reaching number fifteen with $10 million in revenue. Despite this, none of the games reached the top 100 in terms of downloads, indicating that these players are in fact more inclined to make in-app purchases than with other titles.