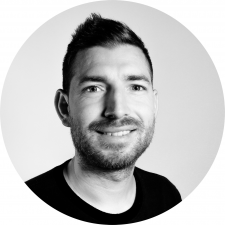 Web3 and blockchain technology are becoming more and more prominent, and companies within the tech sector are eager to carve out their place in the new frontier.

Mobile gaming is no different. Companies are taking advantage of the potential of the technology to create new experiences for gamers, whether that's through giving them the opportunity to earn money while gaming or simple offering novel mechanics.

We spoke to Superfine CEO Christian Calderon about how Web3 is impacting the mobile games space.

Pocketgamer.biz: First of all, can you introduce yourself and your history with the mobile space, as well as Superfine.

I’ve had the privilege to work with and learn from some amazing teams over the years. Together we’ve built and launched some awesome games.

First as an executive at KIXEYE (acquired by Stillfront), where we built games like Backyard Monsters which was an early inspiration for Clash of Clans, then at Dots (acquired by Take-two), where I launched the game Two Dots, and then at Ketchapp (acquired by Ubisoft), where I worked on a ton of games like 2048, Stack and others.

In 2019 we started Gamejam, achieved 250m+ downloads and became a top mobile games publisher. Today, we’ve rebranded to Superfine, with a new focus and bold mission in Web3--we want to 1000x the Web3 gaming market.

Preservation has been a regular topic in the games industry, with console generations leading to lost games, the death of online stores (and Flash-era websites) blotting out parts of gaming history and even the forward march of phone OS forcing developers to either maintain older games or see them delisted. How do we create an accessible, secure platform that averts this concern?

Immutability is one of the most important features of blockchain technology for ensuring that the network is permanent and unchangeable. While we are still early, the blockchain grants an opportunity for the preservation of our games. With new infrastructure we can get there.

There will be hurdles along the pathway to decentralisation, and we are all a little uncertain of how this technological revolution will play out, but I do believe the winners of the infra race will value ecosystem development over politics & corporate greed.

One of the many cited reasons that Flash Player was eventually scrapped was security; with Web3/Blockchain playing so heavily on themes like scarcity (through limited run NFTS) of digital assets, what kind of considerations go into selecting your partners for a project like this?

For web3 game studios, the task of selecting partners is incredibly important. With so much opportunity in such a new space, there’s an explosion of companies that are ready to partner with you.
For us, when selecting partners we’re looking at their track record in the industry, the team and of course the product.

Hypercasual has been one of the interesting developments in the mobile game space for some time, with one of the most interesting things about it being that 99.99% of the users who play those games are unaware of that umbrella term used to describe the mechanics. In many places, including Pocket Gamer, it's often referred to as a genre, while it's actually a kind of fusion of style, attitude to mechanics and monetisation. How did you find working in the hypercasual space vs your previous engagements?

When we first started making these games, most game developers did not consider them to be games, and to me, this marked the beginning of the wave of contemporary mobile game design-- games that transcend boundaries between what we consider a game and what traditionally is not considered a game. In the beginning, it was mostly about the art, the feel, and the emotion. Then as it got more competitive, the industry transitioned into whoever could come up with the best amalgamation of features, mechanics, styles, themes, in a game iterated fast, but meticulously, to get to the perfect ROAS.

Expanding on the last question; Hypercasual is a term and category that exists regardless of the end users' awareness of its name. Blockchain and Web3 tech came with an explosion of terms that were not well known outside of those in the tech industry. How much do you think the 'language' of a technology plays into mass adoption?

I don't want to downplay the importance of onboarding in Web3, but it’s important to note that Web3 benefits from an existing Internet adoption curve that’s been brewing since the 1960s. It wasn’t until the late 90s that we had more user-friendly ways for the public to utilise the internet, which started adoption growth. Similarly to what we did in the 90s with the Internet, we are doing today with Web3--making it more user-friendly to utilise.

Mass adoption for Web3 games will also need to be driven by focusing on how it benefits players, as opposed to the technology used to enable those benefits. Focusing on the technical side is a bit like running a UA campaign for a mobile game that focuses on the fact that it’s made with Unity. Users won’t convert based on that, they will still convert based on how fun they think that game is for them to play.

We're arguably at an important junction in a technological revolution. How do you see the role of Web3, Blockchain, and decentralisation tech playing a role in gaming over the next few years, and are there any new emerging technologies that you're excited about?

Blockchain solves a lot of problems, but most importantly it allows us to do things that we couldn’t do before. It’s also very exciting to think about the combination of blockchain with other emerging technologies like cloud computing, machine learning, and AI.

Decentralisation will play an increasingly important role in gaming over the next few years, not just for the game assets themselves, but for most components of the games, such as production, investment, publishing, localisation and design. There are multiple pathways to decentralisation for our industry all across the value chain.

The next few years will be a time for experimentation and iteration to build a bridge between these use cases and mass adoption.

Where do you see mobile games in the next 10 years?

One thing’s for sure, we’re in for a wild ride. There are some fundamental shifts underway that will play out over the next 10 years. As an industry, if we do our job right, the next 100 million players to engage in web3 won’t even know they have, but will benefit from the awesomeness it enables.

It’s likely that we’ll also see changes in the audience for mobile games. We’ll see the Roblox generation grow into having disposable income and the authority to spend it. We’ll also see an older generation that’s been playing games for 15+ years, ready for more complex mechanics and business models.

On the marketing side I think it’s likely that we’ll see an evolution in how we acquire, engage and understand our player base, driven by machine learning and pseudonymous identifiers like blockchain wallets. This in particular is what we’re focusing on at Superfine and we’re excited to play our part in the bright future of mobile gaming.