Walk around to gain in-game energy 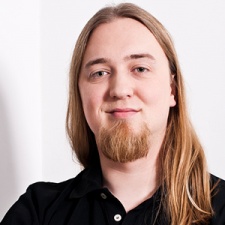 German developer HandyGames is always first in line to test out the gaming potential of new technology.

“We don’t have one platform that fits all,” says CEO Christopher Kassulke, as we discuss the blanket approach his studio takes to publishing its games.

Wear on the wrist

The explosion of smartwatches predates the Apple Watch announcement, but it was Cupertino’s intention to join the wearables market that brought the tech into the general public’s consciousness.

Undoubtedly HandyGames will be there on the Apple Watch launch day with its games, because it’s already testing the waters with Android Wear.

“We have four wearable products on the market already,” Kassulke explains.

“We’re not millionaires with the products yet but we see a growing demand. A lot of new devices are shipped every day and I believe we’ll see a big boost after the holiday season. A lot of fitness bands and smartwatches are sold out already so I’m very sure we’ll profit from it in the long run.”

We have three more big projects for Android Wear before the end of this year.

As he points out, it’s still very much early days. Not just in terms of whether this will be a viable gaming platform, but the hardware expectations and primary features are still very much in flux.

“It’s still a very young market and a lot of different manufacturers are fighting for market shares with very different hardware.

“Battery Life is the biggest challenge in the moment, but it’ll evolve very fast,” he says, looking at the steadily emerging trends for smartwatch design.

“We’re already seeing new concepts for navigation, and we love that. I’m sure we’ll see the next big push in wearable hardware during CES and MWC. And you can be sure HandyGames will have content for the new features, as we work with a lot of OEMs.”

Forearms to the fore

Every time a new technology trend emerges, someone looks at how it might be turned to gaming purposes. Most fail, but some find just the right angle to reveal a platform’s unique selling point as a gaming device.

HandyGames has plenty of experience in this area, having searched high and low for ways to deliver games to a broad range of - often initially unsuitable - tech.

“We try out several integrations and features in the beginning,” Kassulke explains about his studio’s approach to uncovering gaming potential.

“With our latest release Guns 'n' Glory Heroes Wearable Edition we combined the player’s daily activities into the gameplay. To recharge your life in the game you have to walk around in real life. That’s the kind of innovation we and our OEM partners like.”

You have to be even more agile than in the mobile or smartphone sectors.

But innovation doesn’t come easily, or necessarily cheaply. It’s no small investment for a game developer to commit to a new platform; especially one that’s not guaranteed to make the transition into a feasible and profitable gaming ecosystem.

“This time you have to be even more agile than in the mobile or smartphone sectors,” Kassulke warns newcomers to the wearable tech gaming world.

“You can’t just port existing games to wearables. You have a completely different user behaviour on the smartwatch compared to the mobile phone. What users expect are new, innovative ideas, because that’s what they expect from the wearable tech they just bought.”

The future of wearable tech gaming

HandyGames is experienced enough to spot an emerging games market when it sees one, and with several smartwatch games out there already, it’s busy looking to the future in an effort to predict what’s coming.

“We’ll combine more wearable tech into our games,” he says. “For us and the consumers it’s important to use the features within their hardware. Think about the Pulse, GPS and Fitness APIs. We’re currently working on a huge project for wearables, which I’m looking forward to sharing with everyone very soon.

"I can tell you we have three more big projects for Android Wear before the end of this year, and perhaps we’ll see some other surprises.”

I’m skeptical that [VR will] be a mass market in the near future.

And what about the other angle to wearable technology, virtual reality? It’s an equally hot topic that’s not quite delivered the retail goods as yet.

“Everyone ask us when we’ll join the VR gaming sector,” Kassulke laughs. “Currently we’re carefully checking out the market and the possibilities, but personally I’m skeptical that it’ll be a mass market in the near future. I see more growth potential in wearables than in VR.”

No one knows quite how the Apple Watch is going to affect the gaming potential of smartwatches yet, as the device is being withheld over the traditionally tech-heavy Christmas period, with an April 2015 launch currently expected. But keeping an eye on HandyGames is a good way to gauge its gaming potential.

“The easiest way to keep updated is our Facebook channel, and keep reading here on Pocket Gamer,” Kassulke concludes.

“And I’ll be showing a lot of new titles in Busan during GStar, so if you’re attending feel free to pay me a visit!”