Soft launch your game as soon as possible, says Zeptolab 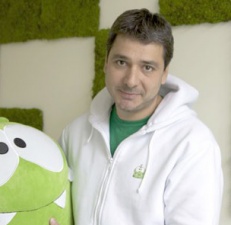 Zeptolab CEO and co-founder Misha Lyalin was keen to stress at Pocket Gamer Connects Bangalore that delaying soft launch is a mistake made too often.

"Today your global release should really be your soft launch," he advised on stage.

"You will never realise your potential until you launch on a global scale. You get data that you would never otherwise receive."

Using this data, Lyalin says that Zeptolab will roll out a series of incremental updates each month over a six month period, rather than waiting half a year before launching and finding that you have to make a lot of changes anyway.

Head of the Cut the Rope studio said that even if the game is not fully realised, launch it as soon as it's of a playable quality to allow yourself to create the best game in response to feedback - in other words, help your users craft the game they want to play.

"If the game has something, the people will carry on playing regardless of graphics," he said. "The most important thing is getting the mechanics right, and as soon as they're ready you should be thinking about soft launch.

If the game has something, the people will carry on playing regardless of graphics.

"Once launched, always look at the data and keep an eye on blogs and websites to learn from user feedback."

Lyalin advises game developers to soft launch by picking a certain territory and launching a game there.

"We do so on iOS because it's more controlled, but it's faster on Android.

"We did it in Canada for King of Thieves and called the game differently, we called it Thieves so people didn't necessarilly know it was us. We did no promotion so it never entered any charts.

"We spent a few hundred dollars to buy a few thousand users but avoided media coverage. You have to look at retention, if retention's not there, it's not there."

PocketGamer.biz regularly round-up the most interesting games currently in soft launch to share insights in the development process of tomorrow's hits.