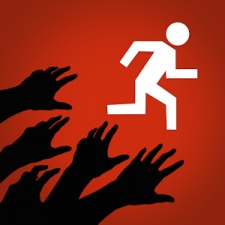 What the long-distance runner fears is ‘hitting the wall’.

It’s the point when the body runs out of stored carbohydrates and has to start processing its own fat to get the energy to keep going.

And that’s where Zombies, Run! developer Six to Start finds itself.

Despite being released in 2012, the audio exercise game, which encourages you to run (faster) as you complete missions and interact with stories set in a zombie apocalypse, continues to be a commercial success.

According to CEO Adrian Hon, it’s generated over three million downloads, has 250,000 monthly active players and tens of thousands of paying subscribers.

“When we launched, we thought we’d sell some copies and move onto the next game,” he says. “But people want more content. It’s been like opening a gym.”

However, Hon has a big plan to take the essence of the game and widen its appeal. Accomplishing this at the desired pace requires more investment than Zombies, Run! generates.

One of the early successes on crowdfunding platform Kickstarter, Zombies, Run! was a mobile game of its time.

The smartphone explosion was in full swing and new ability to track movement and GPS position combined with the growing popularity of fitness trackers and the whole ‘quantified self’ movement to create a synergetic market.

Launched as a $7.99 product, it quickly became the highest grossing health & fitness app on the Apple App Store. It eventually switched to a free-to-play subscription model in 2015.

Created in conjunction with the UK’s Department of Health, it’s in the process of receiving a update as it finally goes free-to-play in October.

Six to Start’s big project, however, is Racelink.

Racelink enables anyone to create their own standalone Zombies, Run!-style race.

Already used by charities including Macmillan Cancer Support and the British Science Association and for its own Zombies, Run! virtual races, Racelink is a platform designed to enable any organisation to create their own standalone Zombies, Run!-style race.

The advantage of this approach are clear: it widens any event’s potential audience from those who can physically travel to a race location on a given date to anyone who signs up via the web. Participation can be further extended as the organisers can allow people to run their virtual race during a period of days or even weeks.

There’s no reason runners don’t get the same rewards - t-shirt, medal, ability to share their experiences on social media - as a typical race either.

Indeed, it’s such physical items (albeit received through the post) that means the average entry price for Racelink events to-date is $55. That level of monetisation is both good for the charities, who take the bulk of the money, and Six to Start’s cut of the action.

The current problem is it requires a lot of manual work to set up each event.

Hon says the next step is to ensure Racelink works in a more self-serve manner; something that will also require a redesigned website, more server robustness, and ability to scale the platform.

“I was surprised we didn’t hit our target. It was a shame US investors couldn’t get involved,” Hon muses of the geographic and legal restrictions around equity crowdfunding.

There’s no question what we’re doing is good for the world.

“I think the investors on Crowdcube weren’t as adventurous as we hoped. Compared to craft beer, maybe they thought virtual races were too niche, too weird,” he adds.

Keep on keeping on

“The investment would have enabled us to move much faster, especially in terms of reaching out to charities,” says Hon. “But we’ll continue to do what we planned, just a little slower.”

“At some point I’ll work on something different - I’d love to make a VR game, for example - but then I know I’ll really miss this,” he says.

“I get emails all the time from people telling us how Zombies, Run! got them running for the first time, helped them overcome health problems, so this isn’t a job where I worry if what I’m doing is helpful.

“There’s no question what we’re doing is good for the world.”