"F**k scale": Mark Pincus explains why a focus on product was integral to Zynga's endurance

The Zynga co-founder on creativity, failing fast and why the small details in games matter 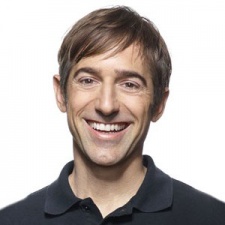 One of the opening sessions of the Helsinki-based start-up event, Pincus offered an insight into the reasons for Zynga’s endurance and his vision of future platforms and opportunities for the mobile and social games industry.

Mark Pincus: It may be hard for us all to remember that in 2007 the games industry was mature and declining, the web game industry was pretty terrible and as an entrepreneur its great to pursue an industry that is mature with the insight that maybe it hasn’t really started it’s growth stage yet. Google was like the 56th search engine.

The games industry was really focused on serving a much more hardcore market and the opportunity we saw was to bring games to the mass market.

What if social gaming could be its own social medium? And even if not, hardcore gamers could use it to connect with people in their lives?

Your first game was actually a poker game. You’re a serial entrepreneur, you did a social network before, why start with social games?

It's funny, I started the first social network no-one has ever heard of called Tribe.net. It was pretty amazing to fail as a social network at that stage considering the interest in social media, but the big insight I took to what I did with Zynga was that, as entrepreneurs, we are on a journey to try and isolate our winning instincts form our losing ideas.

With Zynga I was determined to not just pursue one thing - which I did with tribe - I wanted a lot of shots on goal and chances for wining ideas.

First with poker we had a realisation that people were hanging out and they wanted to connect but there wasn’t an easy way, so poker was like an always-on bar. People really responded to that.

Then we tried a lot more games and most of them failed. We got to a point where we were supporting 10 games and poker was just one, so we decided to retrench and focus on this one game to make it better. And that poker game is still one of top games 10 to 11 years later

It was a useful reminder that consumers don’t really want lot of new ideas, they want the thing they are into to get better and better.

The prevailing wisdom in start-ups by 2007 was ‘fail fast’.

What allowed Zynga to be one of the winning companies?

The prevailing wisdom in start-ups by 2007 was ‘fail fast’. The problem with building a minimal viable product and then trying to fail/succeed in a binary way is that you were building products in a vacuum. An idea we got to very early on with Zynga was that instead of a fail state, we needed to be in a learn state. First get a game out to a live audience, and then iterate.

An established games company might spend two years to make a game before coming to an audience, we’d spend four to six weeks, so the number of engineering days wasted were less. We were probably testing 100 new ideas a week whilst the games industry was more like four a year.

You’ve been characterised as a 'product maker entrepreneur'. How do you balance between creativity and getting to scale a big company?

There’s a lot of answers to that. It’s a tension we all face, hopefully as our companies flourish. If we got here because I as a CEO had good instincts and abilities around making products people like, now we’re spending time on things we’re not great at and spending time on scale not product improvement.

I got to a point where I said ‘f**k scale’, what I want to do is make sure that the product is right. People say micro-management is a terrible thing, but if you’re at a McDonald's you don’t care how many people they are serving, you just want a good experience.

Similarly, in games production you have to really care about the detail at the pixel level and it’s difficult to do that when in management meetings and not product meetings.

The best consumer product CEOs have their hands deep in the details, including the current CEO of Zynga.

Let's talk about games. One thing that’s harsh is that it's relentlessly creative. How do you think of new gaming concepts and how do you evaluate new ideas?

The first answer is we came up with this idea of running a game as a live service, to treat it as a franchise and grow our business vertically by growing the franchise. A mantra in the company was a ‘bold beat’ focusing on a positive disruption of the consumer experience.

The best consumer product CEOs have their hands deep in the details.

In FarmVille we added one small element like being able to make the pigs move and all of a sudden players imagined new dimension to gameplay, and it was an idea that could make people play for three more months.

You have to focus on what consumer wants and not try to force the improvements you want.

One trap for product people is that you want to make things better. What methodology do you have to decide what to focus on?

I taught this class on product making at Stanford business school. The core concept we used was this idea of proven/better/new.

When Steve Jobs came back to Apple he said they were trying to make everything 10% better but ended up making the product 50% worse.

We have to put our egos aside and realise it’s so hard to make products better. We need to de-risk by saying how do we isolate the new ideas we want to test from the things we don’t want to change.

I thought Supercell did such a good job with applying the innovations that we developed in FarmVille with Hay Day on iPad.

We discussed backstage that really they had one main idea to change an established format, how about making it ‘swipe’ rather than 'tap tap' - one small variation that was foundation of a great game and an incredible company.

You can make a new product with no or few ‘new’ ideas in it and it can still be great.

The core idea is there’s never been a farming game that’s’ easy to use on mobile and you almost don’t need anything new beyond that. That’s enough. Why barrage with a hundred new ideas when people already like a certain type of game?

You can make a new product with no or few ‘new’ ideas in it and it can still be great.

You have a portfolio of games people have played over a billion times. Zynga Poker, FarmVille, Words With friends, Draw Something, etc. Where do you get the ideas?

I kind of have two answers to that. I love to see mash-ups, I used to call it ‘Frankensteining’ the game. What would happen if we had location check-in dating and farming? What would it be like if Pokemon GO married FarmVille or Words With Friends?

The second point is that we need an environment to create our ideas and quickly test them. It feels like it's getting hard on mobile, a lot harder than it was on Facebook web [games]. I'm wondering how we get to this new space where we can easily test and interact with an audience.

What do you see as next big cocktail party, a space where games will thrive?

Facebook was the cocktail party. On mobile today I’m excited about Facebook Messenger opening up and allowing HTML-based games, and we’re doing a lot there. We’re wondering if Snapchat is going to open up.

I feel like, as developers, we shouldn’t just wait for platforms to open up. I’m inspired by crypto tech and blockchain and see a new eco-system working together that feels open, and I’m wondering if there’s a metaphor we can take to mobile where we’re less working on our own and are more interconnected.

You were talking back stage about favourite books, can you tell me about this?

I’ve been inspired for years now by Ready Player One, that’s a great book. It did a better job of pointing to this near future and virtual world experience.

I’ve had an idea I blogged about 12 to 15 years ago called 'dot Earth'. What if there was Minecraft meets Second Life but as an open platform where there was software people could go and use, any entrepreneur could add a server or a virtual extension of the world like dot.space. A common data protocol so people could bring avatars/currencies from game-to-game and be connected.

So maybe, having a game where you’re playing as an avatar with other people. Do you want to be part of building that?

There’s another related idea I’ll throw out to all of you related to our experience on this phone. I’m wondering if we’re on the verge of a new metaphor for how we browse our new experience.

The app store experience feels like Window 95, but there is no metaphor for us as consumers. What if Google Maps became a new browseable surface/ecosystem. What if we could offer apps that users could instantiate on Google Maps, you may navigate maps by social and connect on a game they are playing. I think as consumers we need this new metaphor.

So as a way we’re currently using Alta Vista and not aware that Google is coming up?

Yeah, what makes me optimistic is that we often see these big companies and feel like an opportunity has been played out - Facebook, Google, etc - but then we have this realisation with history that growth hasn’t even started yet.

You can have this instinct to know that there’s so much more ahead of us and we’re really waiting for the next platform to open that up.

I’m hopeful that it's not housed in a single company and am inspired by cryptocurrency to think there’s a new model that’s a post-capitalism, post-investor moment where there’s a more pure alignment between us. as makers. and users so we can create more happy superfans.

So the users would more ‘own’ the companies?

Yes I think so. I don’t know if people know Bluebottle coffee, they were acquired by Nestle recently which is a good outcome for their investors, but it's not obvious why it will be better coffee for their customers. In a couple of years, could they have floated a Bluebottle coin and have more super fans as investors?