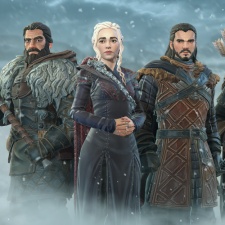 The Game of Thrones TV series is now over, but its legacy will surely continue for many years, given its global fame.

The latest effort to bring the franchise to smart devices comes from Behaviour Interactive and GAEA, which have collaborated with HBO on new mobile collectible strategy RPG Game of Thrones Beyond the Wall.

The game sees players take over command of a castle of the Night's Watch, tasked with defending Westeros from threats north of the wall - such as the threat of the White Walkers.

Pre-registrations for the game begin today, with the title set to launch this year. To find out more about the game, we caught up with Behaviour Interactive creative director Justin Jones to discuss design choices and working with a globally recognised and beloved IP.

PocketGamer.biz: Could you explain how the game will work and some of the key features?

Justin Jones: The game is about role-playing the Lord Commander of the Night’s Watch and defending the Wall.

To do that, the player recruits, upgrades, and battles with units in tactics-style combat. Beyond the story campaign, players can also take their favourite squads and play them in a number of different game modes, including both PvE and PvP.

Above the game modes and moment-to-moment, there is a deep metagame around which kingdom to spend your efforts recruiting from - the crossbowmen of the Westerlands, the poison spears of Dorne, or the cutthroats of Fleabottom - and which of those recruits to invest deeply in.

So there are three game areas: Castle, Combat and Collection - each one of them offering different gameplay and choices, affecting the player’s overall strategy.

Why choose the strategy RPG genre for this IP and why focus the setting on the Wall and the Night’s Watch?

Our main goal was to craft a compelling player adventure in a way that was authentic to the brand. We chose to do that with an original story that centres around the disappearance of the previous Lord Commander - Brynden Rivers or Bloodraven, and eventually the Three-Eyed Raven we see in the show.

The quest to find him becomes the starting off point for players, but evolves into a framework to support many years worth of game content.

The themes surrounding the Night’s Watch and the regions beyond the Wall touched on so much of what we loved about Game of Thrones. The magic of greensight, the mystery of the far North, ravens, the coming winter, the Long Night, etcetera.

We wanted to tap into classic role-playing and old-school storytelling and those themes made it the perfect setting for an Adventure RPG.

When it came to narrowing down our genre choices we found that we fit perfectly into the space of Game of Thrones games just starting to develop. Specifically, 4X grand strategy is already covered so we wanted to zoom in closer to focus on a story campaign, characters, tactics combat, and collection.

Will the game feature single-player and/or multiplayer? Being a strategy game, how long will matches last?

The game will feature multiple PvE game modes, PvP and some social features at launch. As this is a live game, much more will be developed over time.

Matches typically last between one and two minutes, with three minutes being at the upper end of the range for more complex boss battles, etcetera.

What’s your initial live ops strategy going to be? Are you already thinking about in-game events, challenges, etcetera? And what might these look like?

We're definitely already thinking about all of this. The game’s overall framework, progression systems and various modes were designed with years of content in mind.

We want this game to be a Game of Thrones fan’s touchstone with the brand. So there will be plenty to do on launch day, but also a roadmap of in-game events to collect new heroes, earn new abilities, etcetera.

The fiction behind the in-game events is powered by greensight and the ancient magic of weirwoods, so this allows players to collect and play with heroes out of the timeline that game is set in - a few decades before the show.

How challenging is it working with such a big IP and what considerations have you had to keep in mind?

Living up to the potential of the brand has been the North Star we used throughout development. There were deep fans all over the team and so were always designing with both our hearts and heads.

One of the biggest challenges designing for mobile is considering the way the experiences are consumer - and then reconciling that with the game’s design, trying to maximise fantasy fulfilment every step of the way.

As an example, storytelling is difficult on mobile but we decided to make it one of our innovations because it felt right for the brand and the player experience we wanted.

In today’s live service landscape of hit games that run for years, that classic wisdom needs to be updated.

How closely have you worked with HBO, the creators of the show and George RR Martin on this project? And have you had the freedom to create your own stories in the Game of Thrones world?

I pitched the concept of writing a story about the disappearance of one of my favourite characters from the story and they were very supportive. So I began the long process of writing the actual script.

They gave notes throughout and, just like the production process overall, I found them to be good people and fantastic licensors to work with.

How does the partnership between Behaviour and GAEA work? And why work together on this?

It is a co-development partnership between Behaviour and GAEA. Since we wanted our game to reach as many Game of Thrones fans around the world as possible, we wanted to work with an Asian partner to do that.

I believe Game of Thrones will continue to strongly resonate with consumers. Its themes are timeless and the affinity the audience has with the characters is very deep.

I think these attachments make it perfect for the mobile gaming audience because, simply put, mobile devices are ubiquitous and so the right game design lets you experience your favourite brand multiple times a day and allows the game’s content to evolve alongside the brand.

How do Asia markets, particularly China, fit into your plans for Beyond the Wall? Will we see a release there?

We do plan on releasing the game in Asia as part of our overall strategy.