The Voodoo Approach: How AquaPark.io developer Cassette grew with help from the hyper-casual publisher 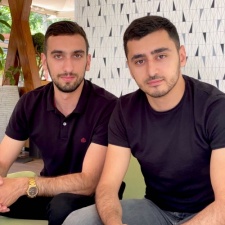 This time around, we spoke to Edgar Frangulyan and Khoren Jamkertyan, founders of Cassette - the studio behind AquaPark.io - about working with Voodoo and creating successful games.

PocketGamer.biz: How did your company first get started?

Khoren Jamkertyan: Since 2013, we were fascinated by the idea of creating mobile games. We even decided to name our future company "Cassette" when we were 16. The idea was floating around us since then and we knew that we would do it one day.

After 4 years, when Edgar finished serving in the army, we immediately started working seriously in that direction and officially created the company.

Back then we didn’t know the term ‘hyper-casual’ but we were obsessed with the idea that a small mobile game made by two guys in a "garage" could make such a big impact on the world. So we were always mainly focused on hyper-casual games.

In 2017, when we decided to work on making games as our long-term plan, we saw that the most successful games were brought to life by publishers, and we also saw that the games published by Voodoo were the most appealing and fun concepts from our perspective. So we sent our first and only prototype to Voodoo and our partnership began.

Edgar Frangulyan: As a young studio, first of all we got a lot of insider information from the guys who knew the market very well, and it was a big trampoline for us to develop a more targeted style of ideation and development.

Aside from that, sharing their experience with you and providing the most advanced platform for testing your game KPIs, which by the way is a huge time saver. These guys are experts of feeling the thin line between giving advice and letting you make your own decisions and taking your game in the direction that you feel is the most correct.

The weekly calls with the publishing team with deep analysis of every aspect of the games. The team-based advice from the managers. Finally, the care they take for the studio to make a strong and long-lasting partnership are the things that help us most when it comes to business growth.

There are so many of them, but the most important ones for us are understanding psychological behaviours and emotional needs of the players, which we then try to fulfill during the gameplay.

Also, a successful hyper-casual game is the one that brings something fresh and innovative to the market.

You need to understand that success doesn't come overnight and that while a successful hyper-casual game can be made in a week, it doesn't mean that it takes a week to make a hit game.

You have to be ready to fail a lot of prototypes and, what's more important, you should understand that if you take a lesson from a fail, it stops being a failure.

From a business point of view every game is a product that has to be scalable in terms of marketing and monetization.

Testing the KPIs helps not only to understand the marketability and monetization potentials of your game, but also helps you to understand from which part your game needs to be improved to make it more marketable and therefore more profitable.

Pushing a game without testing the KPIs is the same as playing soccer blindfolded. Thousands of new games are being uploaded to the store every month which means the market is highly competitive. Statistical analysis helps you to make the most accurate decisions so your game can be successful and profitable.

As always our goal is to bring new awesome games to the world that people will love and enjoy.