The Big Indie Interviews: Robert Thomson tells us all about Gogogo!'s party game mechanics and being a part of The Big Indie Pitch 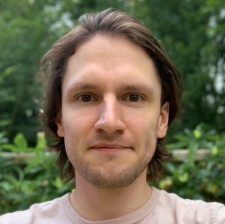 Today, we're speaking to Robert Thomson, who submitted Gogogo! to The Digital Big Indie Pitch (Mobile Edition) #2, and walked away with the prize for third place.

Robert Thomson: I am a solo developer! I created everything that you see in Gogogo! The only thing I didn't create was the music. The heart of my inspiration actually lies in board gaming. I love the competition and social aspect of board games - where the players are focused on each other as much as the game. It's a rare thing to find in video games, as everyone is generally absorbed by what's happening on the screen.

Tell us about Gogogo! that you pitched at the competition.

Gogogo! is a head-to-head, tournament-style party game for 3 to 16 players. There's a completely different challenge every round!

There are memory challenges, reaction challenges, creative challenges, physical challenges and more. It's a chance to test your natural ability against your friends and family!

What do you think are the most unique and interesting aspects of Gogogo! that gamers may never have seen before?

The challenges in Gogogo! utilize your phone's functionalities exhaustively to create the most interesting and varied playthrough possible, but also respect the flow of the game and consider the attention span of the player.

You don't need to have played video games before to understand the challenges in Gogogo! They are all designed to test skills that you have innately, but would rarely get to show off. In other words, you can jump from game to game fluidly, with barely any effort or time needed for learning rules.

You can also turn off any of the 50 challenges, so you can completely customize your own tournament experience. I think most games don't encourage you to play the way you want to, and when you're trying to design a game that's going to suit everyone, you simply have to.

Gogogo! is a game that seems to seamlessly capture the party magic that made games such as WarioWare so popular. What made you choose to make a party game though, and what do you think you bring to it that may not have been seen before?

I just love party games! I think a good party game helps even the most introverted person to lower their defences and get into their element, socially. But in most party games on mobile (and I'm sorry to say that there aren't many) there is rarely a long-form competitive element to the game. In games like Heads Up, sure there are points involved, but no-one keeps track. There isn't a winner or loser to speak of.

As someone who loves a challenge, and loves playing with other competitive people too, I was disappointed that I couldn't find more on the app store that offered a competitive experience in the same way that board games do.

I feel Gogogo! is probably unique in this aspect. The minigames themselves are often not a radically new concept, but a rich and varied collection of challenges that always focus on fun and competition, handily available of your mobile device whenever you choose to whip it out, is certainly something that I think is missing from the app stores.

There are myriad other problem areas and gameplay-limiting design conventions that mobile party games seem to follow too. To me, it seems that app store party games are limited to drinking games, games that are fun for a short time but get very stale if you play them for a while, games that require the internet, and games that require everyone to download the app and to have a charged battery.

As far as I've seen there really aren't any games that are designed to play anywhere, whoever you're with, and guarantee a fun experience for everyone, every time.

How did you come to choose the platforms that you would develop Gogogo! for?

It really was a no-brainer to me to develop for mobile. Added to the reasons I mentioned in the previous answer, the kinds of games that are possible simply because it's a mobile device are so varied; whether you're interacting with the touch screen, using the accelerometer, hiding the phone for others to find; none of these things would be possible in any other format!

I have found the process particularly difficult. It's been a long and often stressful journey, and I've had to learn so much in order to get to this point.

I've been in development for over 2 years with Gogogo! and honestly, despite the wonderfully positive feedback that I have received about the game, I know that its a success will be hugely dependent on luck and marketing - something that is totally new to me. Despite having finished the game I feel I am still at the beginning of my journey.

Start small. If you have an idea that you think will take a month to finish, it will probably take more like 3 to 6 months, to do it properly, and after you're done, your work won't be over - this is especially true in mobile game development.

There are so many things that you will not be able to anticipate at the beginning of your journey, be ready for that, you don't want it to be a surprise, because that will surely damage your motivation to finish your project.

It was very exciting! I wasn't entirely sure what to expect, as the format of the interview depends so much on the judges in the panels. Some of the judges wanted to hear about the game and preferred not to talk, and some were the total opposite, to the point where they seemed to speak more than I did, making it an interesting challenge trying to get my pitch done in 5 minutes!

With all the panels I had to cater my pitch to their style of interviewing on the fly. I enjoyed talking to the other pitchers in the breaks. The current situation is unfortunate because I would have loved to hang out with them and chat over a pint.

I've gained a lot of confidence in the game. It's was a little difficult to pitch the game to people during development, when they couldn't see all the pieces of the image in my head.

The comment I used to get most often was "I don't really get it", but now the comment I hear most often is "this is exactly the kind of thing I've been looking for!", and this experience has just helped to reinforce that in my mind.

I simply hope to spread the word about Gogogo! as far as I can. I don't really have any monetary ambitions apart from maybe make enough to fund my next project. The only thing I really care about is introducing the game to new people because I love hearing about the great nights people have had playing with their friends and families.

Want to show off your exciting new game? We host Big Indie Pitch events throughout the year, so be sure to regularly check our upcoming events page here and over on BigIndiePitch.com.