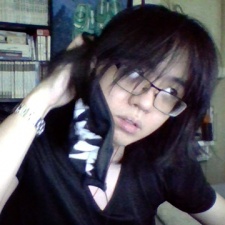 At PocketGamer.biz, we want to profile the many incredible people from all walks of life that are critical to the success of the mobile games industry.

In our Progressive Play series, we discuss finding a place in the games industry, the various challenges faced, and what needs to be done to make games more diverse.

PocketGamer.biz: Can you tell us a little about Anarch Entertainment and your mobile release, NOISZ?

Ken Tang: In short, we're a close-knit group that loves rhythm games! NOISZ is our first and only series as Anarch Entertainment, featuring rhythm bullet hell gameplay with a heavy emphasis on story. Currently, we have releases on PC via Steam and mobile, with entries coming to arcade and Switch in the near(ish) future.

You might have heard that our entire team is LGBTQ – this is more something that just happened rather than being a specific hiring criterion, but I think it helps that we have an environment where everyone feels comfortable being and expressing themselves.

Entering the mobile gaming market was sort of incidental [...] so I hope that fans of the PC game will stick with us

A hybrid visual novel/Shmups is an unusual pairing of genres. What made you choose this combination, and is it a fit for the mobile audience?

This might be a kind of left-field inspiration, but growing up, I was really into Guilty Gear XX and its story mode on PS2 really stuck with me as a unique experience. It was basically a visual novel with playable fight sequences, and that interactivity makes you feel more involved in the plot.

We retooled things for NOISZ STARLIVHT so that the format is more familiar to mobile game players. I looked to Square Enix's mobile franchise entries (e.g. Kingdom Hearts Union X, NieR Re[in]carnation) for guidance here – you'll play through several short gameplay segments and then unlock a new story chapter. It's a bit different from how we did things on PC, but I think it's well-suited for playing on the go.

In many ways, the mobile playerbase diverges from traditional games audiences. Who do you see the primary audience for NOISZ as?

This might sound crazy, but I generally don't think too hard about this kind of thing – NOISZ STARLIVHT ended up on mobile because we had a fun gameplay concept that's heavily touchscreen-dependent, so entering the mobile gaming market was sort of incidental.

In short, I guess, NOISZ isn't really defined by platform. So I hope that fans of the PC game will stick with us and check out NOISZ STARLIVHT. It's a standalone sequel, so mobile gamers looking for something different and challenging can hop in without worrying too much about what happened before, too.

How did you start production of NOISZ, and what were the key challenges  during development?

Basically, we'd just finished developing the last content update for Pump It Up Infinity (an arcade dance game) and I pitched the idea to some members of the team. They were down for it, so I started a tiny company to make the game and here we are...!

The original NOISZ was initially developed on a shoestring budget after a failed Kickstarter, which was quite difficult logistically. We're definitely better off this time around, and I think the experience taught me a lot about project scoping and planning.

Developing NOISZ STARLIVHT during the pandemic was its own set of challenges, though, largely relating to team morale. Juggling it with the upcoming arcade game has also been extremely hard, but that's finally coming to an end soon.

You can have gay characters or stick a pride flag somewhere, but you can't write an authentic narrative

This is the second in the STARLIVHT series on mobile. Can you detail the mobile reception of 2ECONDS TO STARLIVHT+, and any key lessons learnt from that release?

Well, as the + indicates, it's an enhanced port of a pair of visual novels we've released on Steam, and both versions are entirely free. In some sense, I view 2ECONDS as a part of NOISZ STARLIVHT's marketing rather than something I have expectations for itself, although as a game I do think it's pretty solid...

It's gotten much less attention than NOISZ STARLIVHT itself, but I guess what I'm trying to say is, I'd be somewhat troubled if that wasn't the case, so I don't have much of a takeaway from it.

There is a definitive, pronounced LGBTQ dev scene on PC, and many games that forward queer perspectives also find popularity on console. Do you see similar opportunities on mobile?

It's a slightly complex question, honestly. One major difference between PC/console and mobile is that if you look at the biggest hits, historically mobile games have been more about having one strong gameplay hook, rather than being very story-centric.

That's not an environment in which you can present queer perspectives with any real depth. Sure, you can have gay characters or stick a pride flag somewhere, but you can't write an authentic narrative if people aren't looking for much of a narrative at all.

I think people's expectations for stories in mobile games have been changing, though. Games like Genshin Impact have a strong plot and character focus and, well, that's obviously been doing great. I think that opens up the space to start telling LGBTQ stories, and so it'll catch up to PC in that regard over time.

What unique issues do LGBTQ creators face in the mobile games industry, compared to PC/console?

One issue that comes to mind has to do with pricing expectations in the mobile gaming space. You're much more likely to receive harassment in reviews if your game is free or very cheap, and with mobile games, unless you're triple-A you generally need to set the price super low...

App Store Connect and Google Play Console both have some quirks that can be problematic for queer creatives as well. For example, if you don't want Apple to associate your legal name with your app (and display it on the game's page), you'll have to register legally as a business. And Google Play requires you to display an address on the app page, which is... well, definitely set up another mailbox somewhere nearby if you can. In short, you'll have to jump some hoops to maintain your privacy and safety, relative to releasing games on, say, Steam.

What advice would you give to people looking to enter the mobile games industry, particularly any steer for additional support for queer people?

I think if you're just getting into game development, and you have this big vision of what you want your game to be like, it's important to not be overly financially dependent on your game.

There's two reasons for that: first, of course, you want to be able to survive if it doesn't meet your sales expectations. But also, being free of that pressure makes it much more likely that you can commit to that vision, rather than compromising it because you need it to sell. That's especially important if you want to center the queer experience in your game without softening elements in an attempt to make it more palatable to the mainstream.

Also, it's absolutely, extremely important to have a team you can trust. You'll be working together a LOT to achieve the same goal, so make sure everyone's actually on the same page.