December 20th, 2011 - 06:35pm
By Keith Andrew
The surprise appearance of a Chinese language app in the UK's top grossing chart was always likely to garner attention.

A suggestion that some of those with the game installed on their handsets never downloaded the title in question, however, makes this case even more intriguing.

As spotted by Mobile Pie's Will Luton on his Twitter account, Hoolai Game's title is currently in third spot on the UK's top grossing chart, having moved up from the #5 position a day previously.

The game itself  which also contains a description on the marketplace written entirely in Chinese  is free to download, but contains a number of in-app purchases ranging from between 69p and £69.99.

But three user reviews on the app's iTunes page suggest that not only are these IAPs being purchased without user approval, but the app itself seems to appearing on people's handsets without them ever downloading it. 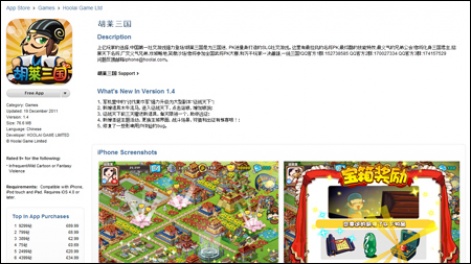 "Just been charged £69.99 for this game regarding in-app purchases," reads one review. "Never used this game before or even heard of it."

Indeed, of the IAPs on offer, the £69.99 purchase is currently listed as the most popular one.

Another reviewer adds; "This app just appeared on my iPhone. I never purchased it yet my account was debited £20."

It's unclear whether the game's sudden rise to prominence is the work of these reviewers have been quick to dub a "scam", though it's undoubtedly odd that a title clearly aimed at the Chinese market would randomly surge up the App Store charts in the UK.

According to statistics from analytics website AppAnnie, Hoolai Games' release has topped charts across Asia - we're guessing legitimately. After all, in September it was the #1 app in China, a separate version was released in Japan under the GREE banner, and another for the Korean market. 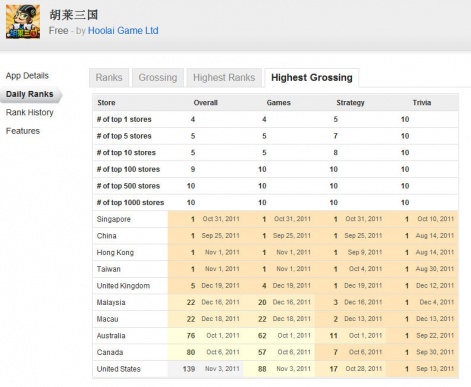 To date, it's reached 139 in the US's top grossing chart, 80 in Canada and 76 in Australia, suggesting its success in the UK is a isolated incident.Head in the iCloud?

If the title is in any way involved in some form of App Store fraud, how such a swindle would be pulled off is also unclear.

One theory suggests it could be tied to jailbroken iOS devices and Cydia, with keystroke loggers using Apple passwords to force IAPs through the App Store.

However, such purchases could be made seemingly legitimately through iTunes itself if a rogue user had access to someone else's password.

Downloading an app on the desktop version of iTunes, for instance, will cause the app in question to suddenly appear on the user's iPhone, iPad or iPod touch automatically, providing they have iCloud enabled - thus accounting for the confusion of reviewers.

IAPs can be purchased in the same way, with users receiving no notification until they get their invoice from Apple via email a few days later.

Yet, the really intriguing point is that if the game is at #3 in the UK top grossing chart - and it's not some sort of Apple error - you'd expect a lot more than a handful of complaints.