Another way to discover good games

Two years in the making, it's launched for iOS and designed to give a better picture of an app's rating over existing methods such as user reviews and chart position, favouring quality over bestsellers.

It's broken, so fix it

Appsfire has described the method of discovering new apps as broken due to the use marketing campaigns designed to vault apps to the top of the rankings, and the use of third parties that rate apps to up their reputation.

Apps will be labelled with an 'out of 100' rating and a badge deeming it anywhere between "Red hot" and "Cr-app-y".

Something to be appy about

App Score processes dozens of parameters several times a day across the App Store's library analysing the rating and ranking performance over time.

It also incorporates additional metadata and reviews for apps from across the web from Twitter and Facebook to review sites.

The service hopes to tackle the issue of app scores being gamed by making it harder for developers to trick consumers and tipping users off to popular apps with low utility.

In time, App Score will also be rolled out to Android games and apps. 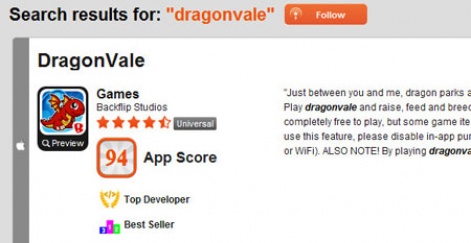