July 18th, 2012 - 12:44pm
By Jon Jordan, Contributing Editor
Many developers complain about consumer app discovery, but there may be another audience overwhelmed by the volume of releases.

At least that's the view of Appromoter, which reckons journalists are having an increasingly difficult time separating the good from the bad.

Find what you want

Also called Appromoter, its goal is to help developers promote and market new mobile apps by enabling better and easier engagement with journalists, reviewers and other key influencers. 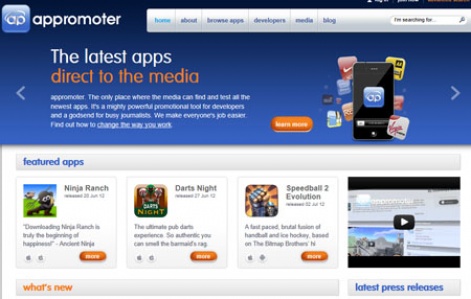 There's even a system for requesting promo codes.

"The idea behind appromoter is very simple. A developer uses Appromoter to give their app exposure, and visibility to the important and influential people who they need to know about them and their app," said co-founder and MD Ed Vause.

"At a time when 500 new apps on average are launching worldwide each day, Appromoter is about helping developers and the media cut through the noise and solve the app discovery problem in a smart, no-nonsense way."

Journalists and developers can sign up for Appromoter now.