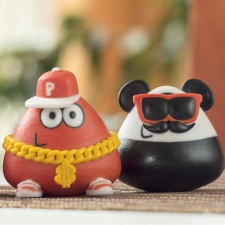 Ilja Laurs is one of the most successful entrepreneurs and venture investors in Lithuania. After selling GetJar, the largest independent app store, he founded Nextury Ventures and now invests into the most promising tech companies in the region across different spaces, from 3D printing to mind-reading and beyond.

Toyze, the first 3D-printed app store, has announced it has signed a licensing agreement with the studio behind the popular mobile pet app, Pou.

It's been downloaded more than 200 million times and has 70 million active users worldwide.

The deal means that players will now be able to take their personalised pet and customise it as a 3D-model, which they can then share on social media, or bring to life as a 3D-printed toy.

Using the in-app 3D editor, players will be able to turn their Pou into a 3D-model, choosing from over 45 different accessories and 10 unique outfits.

Toyze co-founder Ilja Laurs has put the size of the deal into perspective by comparing Pou's  potential to that of the globally recognised Tamagotchi  franchise.

“While Tamagotchi  was the first digital pet, Pou  is the first mobile app pet, and entrepreneur Paul Salame has made it into an international phenomenon,” said Laurs.

“Game players love to take care of and play with Pou, so it was a perfect opportunity to ‘Toyze it!’ and make Pou  part of our 3D game character marketplace.

“Toyze’s momentum is strong. Our users have already created more than 30,000 3D models and we will be announcing several more game developers and characters in the coming weeks and months.”

Pou  creator Paul Salame has also expressed his excitement at giving players the ability to bring their pets to life.

"I'm very excited about our partnership with Toyze! Not only will players be customizing their Pous to play with them in the mobile app, but also in colorful 3D-printed form for their desks and shelves," said Salame.

"Because Toyze is the first promising 3D-printing digital service that focuses on customizable game characters, they are our obvious choice for Pou.”