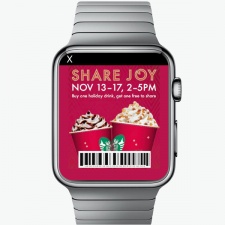 So this is how ads might look on the Apple Watch – programmatic, customised and location-based.

The glimpse comes courtesy of TapSense, a mobile marketing firm that has taken the opportunity of the Consumer Electronics Show in Las Vegas to unveil its plans for an Apple Watch ad-buying service.

While Apple will not attend CES officially, nor will it comment on the use of its watch by advertisers, TapSense is promising a selection of custom ads for Apple’s upcoming smartwatch.

These include ads that can leverage GPS signals from connected iPhones to deliver targeted messages when a customer walks past a client’s store.

Speaking to Reuters, TapSense’s chief executive, Ash Kumar, elaborated that these ads could come in an array of sizes including watch faces, wrist-flick glances and full-screen experiences.

This could allow for keenly tailored, personal ad experiences for the user. For example, Kumar explained that if a consumer were using a transit app and a transport delay was flagged on their watch, an advertiser could send a marketing offer for a time killing mobile game that would light up on the watch’s face.

Too in your face?

However, this could be both the service’s greatest strength and Achilles heel. Being able to detect customers approaching a store may please advertisers, but it also runs the risk of alienating the users themselves.

With such limited screen space, push notifications and banner ads could turn the Apple Watch into a spam box. Consequently, Kumar argues that the ads would need to be as relevant as possible.

TapSense will also analyse how users interact with the ads, so if the watch’s accelerometer detects that a consumer is raising their wrist for a better look, the notifications will expand and take up more room on screen.

The Apple Watch is not set to launch until sometime in spring, so we have a few months to wait until we see the device (and its ads) in the flesh.

What is clear, however, is that ads on a smartwatch could be much more effective than on a mobile phone.

After all, they won’t be in a back pocket or a hand bag. They’ll be strapped to a customer’s wrist, constantly in sight, and constantly updating.