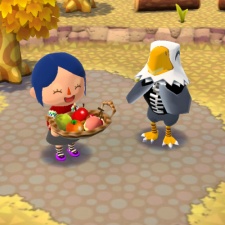 The estimate comes from Sensor Tower, which tracked installs on the App Store and Google Play with its store intelligence data. Nintendo has yet to reveal an official download figure for the game.

Sensor Tower claims that Animal Crossing: Pocket Camp's downloads fared far better than Fire Emblem Heroes, which scored seven million downloads in the same timeframe. However, it is less than half of Super Mario Run's day-six downloads, which came to 32 million.

Comparing outside of Nintendo's releases, Pocket Camp fell short of Clash Royale's 17 million downloads after six days. It did beat Pokemon GO's figure of 6.8 million downloads, though Niantic's game was released slowly around the world.

Pocket Camp is also performing relatively well in the top grossing charts. It is currently ranked 10th on Japan's iPhone overall grossing charts, and is 72nd on the US App Store overall iPhone chart.

Animal Crossing: Pocket Camp  launched on November 21st 2017. It is the third game to be released as part of a partnership between Nintendo and mobile developer DeNA.