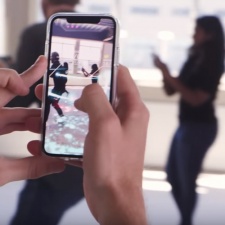 In an extensive post on its website, the studio outlined the next steps in its augmented reality efforts. Niantic is revealing details on the Real World Platform to prove its commitment to the technology, but is also seeking to find third-party studios to utilise it.

The preview details advancements made possible through the acquisition of external technology companies, like the recent purchase of London-based Matrix Mill. These acquisitions have helped Niantic in developing “planet-scale AR” and brought in machine learning expertise.

Matrix Mill’s knowledge in particular is helping to drive one of the more prominent technologies in the preview. By being able to read and understand real-world scenes, Niantic is targeting more accurate AR interactions and to enable occlusion of virtual objects behind reality.

“Because we are so excited about the opportunity in advanced AR, we want other people to be able to make use of the Niantic Real World Platform to build innovative experiences that connect the physical and the digital in ways that we haven’t yet imagined,” said Niantic’s John Hanke.

Niantic has opened up this information, in part, to encourage outside studios to get in touch.

“We will be selecting a handful of third-party developers to begin working with these tools later this year, and you can sign up to receive more information here,” said Hanke.