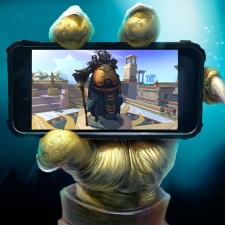 Releasing on October 30th, the iOS version of the classic online PC game became a number one hit in eight countries over the first 24 hours and placed in the top 10 in 15 countries total.

All platforms combined, Old School Runescape hit its highest ever daily average user figures during mobile launch week. That’s following news that the long-running MMO has earned over $1.064 billion in lifetime revenue as of June this year.

“After five years of successive growth since its PC launch in 2013, the arrival of Old School RuneScape on mobile is a hugely important milestone for Jagex in taking the RuneScape franchise multiformat,” said Jagex CEO Phil Mansell.

“Making our living games available to more players on more devices was a priority for us as we set out the third age of Jagex as, over the years, our players have grown up and some, who were PC players, now have alternative format preferences that fit their changed lifestyles.”

Jagex is also working to bring the more contemporary version of Runescape to mobile, with an Android member’s beta for that underway since October 8th. Both versions are offering compatibility across all platforms.

“Now we have delivered Old School RuneScape in its entirety on mobile and offering the game as a second screen experience," said Mansell.

"By providing gamers with a new way to access Old School RuneScape, we have welcomed millions of new and returning players into this amazing game.

“The arrival of Old School RuneScape on mobile, and our ongoing work to bring RuneScape to mobile, is testament to our investment in the continued growth for both titles and building our vision for living games.”

RuneScape firm Jagex on eye out for mobile games acquisitions