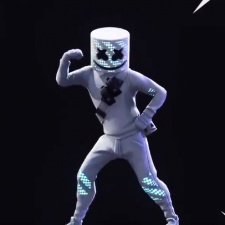 The recent Fortnite concert starring American DJ Marshmello has broken the game’s record for concurrent players with approximately 10.7 million people tuning in to view the event.

Speaking to Variety, Epic Games confirmed the figure was the largest number of in-game players to date. The 10-minute live audio set which took place on February 2nd beat the previous record of 8.3 million users that was estimated during Fornite’s butterfly event in November 2018.

Fortnite’s record for highest concurrent players during a non-event day was 7.6 million on February 16th, 2019.

The figure shows just how popular Epic’s battle royale hit remains, despite the launch of a new rival in the shape of EA and Respawn’s Apex Legends. That title was played by 25 million in its first week.

Fortnite’s mainstream success recently spawned an unlicensed festival held in Norwich, UK. Epic stepped in to shut it down after attendees complained about the poor state of the event online.